A group of armored car guards plans what they think is the perfect crime, which will involve "no bad guys." When the heist goes wrong and a man is killed, the group begins to turn on each other. With Matt Dillon, Jean Reno, Laurence Fishburne, Amaury Nolasco, Fred Ward, Milo Ventimiglia, Skeet Ulrich, Columbus Short and Andre Jamal Kinney. Directed by Nimrod Antal. [1:25]

SEX/NUDITY 1 - A man wakes up in bed and is bare-chested, and a man is bare-chested in a locker room and his pants are slung low revealing the waist band of his under shorts and the top of his buttock cleavage.
► Two men tease another man about the size of his endowment and say "the bigger the gun, the smaller the pistol."

VIOLENCE/GORE 6 - A man in an abandoned factory runs from another man, runs up a flight of stairs, jumps over a railing and lands hard on the ground, he gets up, is chased by three other men, one man shoots him in the back (we see blood on his back and on his clothing), and another man tries to pull him to safety; the wounded man is shot again and he lies on the ground motionless (we see blood on the additional wound and the other man's hand and arm).
► A man stabs another man in the stomach in a dark passage (we hear a crunch, a moan and a thud) and the man with the knife is shown with blood on his hand and the knife blade.
► A man is shot in the abdomen (we see a lot of blood and a large hole on his side and shirt). A wounded man is dragged down a flight of stairs and his head thuds on the steps on the way down.
► Two men are caught in an explosion and we hear them yelling and see one man fall to the ground in flames and another man is thrown by the force of the blast (he is shown with a bloody face). A teen boy is pulled out of the back of a truck (we see that he has a bloody face from a beating), he is pushed to the ground, and held around the neck and with a gun to his head.
► A man in a car is struck by a truck, he gets out of the car and runs, he is chased by the truck, he jumps out of the way, and the truck sails into a large opening in the ground and flips on its side (the driver is bloody, has labored breathing and then is motionless).
► A man head butts another man (we see his bloody nose), and then pushes him to the ground. Two men fight, and one man is punched in the face. A man is struck hard in the hand by a heavy metal ramming rod and we see his bloody and torn knuckles. A wounded man begins to go into shock and his face becomes gray-tinged. A man pours alcohol on a very bloody abdominal wound and the wounded man yells in pain.
► Several men yell and fight and one man fires a pistol in the air to stop them. A man drives an armored truck through an abandoned factory, another man in another truck chases him, they try to ram each other, one is pushed against a wall (sparks fly), one is turned sideways and slammed pinned between a wall and the other truck.
► A man shoots a gun at a truck window several times (no one is harmed). A man with a gun threatens another man. Two armored car guards walk through a crowded bank, one with a case filled with money and the other with a gun drawn. Several armed men surround a large crate filled with money. A man loads an automatic weapon and brandishes it while talking about its power.
► A man walks off the roof of a building, presumably killing himself but we do not see or hear him hit the ground.
► A man causes an explosion as a distraction. An armored truck breaks down under an overpass, the men inside yell over a radio for help, a van speeds toward them, two men stick what looks like an explosive device on the rear window, a man inside the truck jumps on the floor and yells "bomb," there is a flash and a small explosion (no one is hurt and it turns out to be a prank).
► Several men yell at each other in a couple of scenes. A man yells at a woman who talks about his younger brother needing to go into foster care.
► A man talks about another man dying and making it look like he was killed while being heroic. A man talks about the stench in a building from an old dog that crawled in and died. A man pleads for help from another man. Several men talk about armored truck guards having been killed on the job: one talks about an electric jolt that "fried everybody inside," another talks about a fire and says, "they were cooked alive," and another talks about "5 gunmen" holding up a truck. A man says he doesn't want any more blood on his hands (we understand that he killed or saw killing during his time in the military).

SUBSTANCE USE - Several men drink alcohol and smoke cigarettes in a bar scene and a man takes a shot from a flask in a couple of scenes. A man smokes cigarettes in a few scenes. 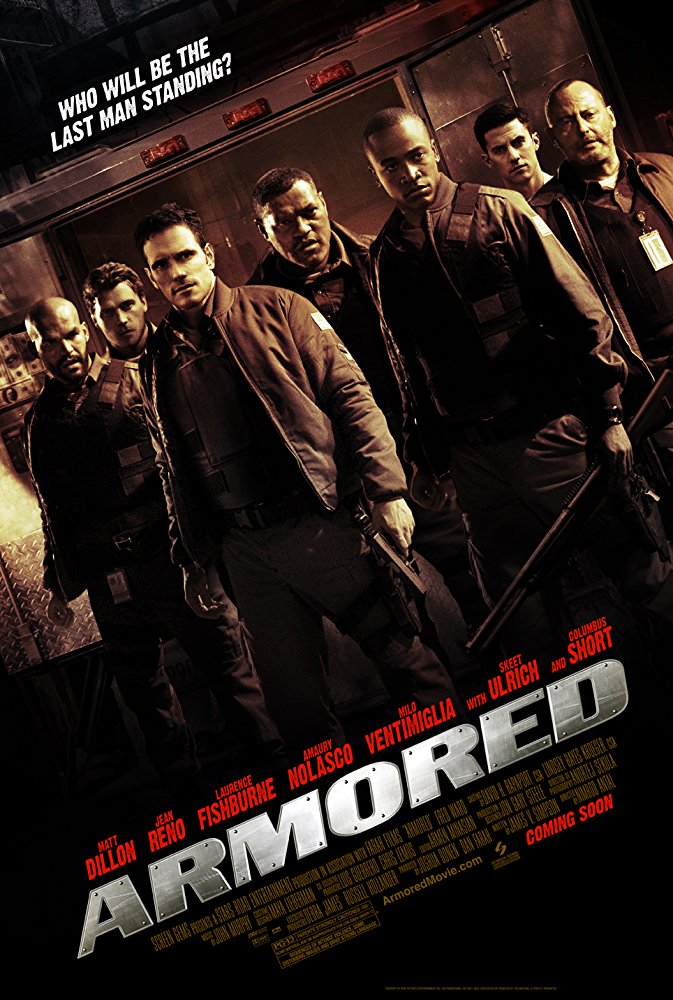