A National Geographic production narrated by Queen Latifah that follows a polar bear cub and a walrus pup through the first two years of their lives and documents the climate shifts that are making their lives in the Arctic nearly impossible to survive. Also with Katrina Agate, Kwesi Boakye, Michael Huang and Dante Pastula. Directed by Adam Ravetch & Sarah Robertson. [1:36]

SEX/NUDITY 1 - A male walrus sings a love song for a female, they swim in the water together, they touch faces and whiskers and hold each other with their flippers (we see an enlarged opening on the abdomen of what is probably the female).
► A male and a female polar bear wrestle and play in the snow and then the female goes off alone to the birthing den.
► We hear male walruses practicing their "love songs." We see polar bear cubs nursing from their mother.

VIOLENCE/GORE 4 - A mother polar bear and her two cubs trudge through a severe arctic blizzard, and one cub which is weak and starving succumbs to the elements and dies; the mother and other cub remain with it as long as they can.
► A walrus pup is separated from its herd during a storm that causes large waves and rough water; it floats on the water alone until it is found adult walrus.
► A polar bear attacks a herd of walruses, it gets hold of a pup, an adult attacks the bear, they struggle and the adult walrus is killed (we see the walrus lying on the ground and the bear standing near it); the pup gets away unharmed.
► A polar bear snatches a ring seal out of the water through a layer of ice and we see it and two cubs eating from the flesh (we see bloody tissue); a small fox picks up a small piece that one of them drops.
► A mother polar bear and her cubs sneak past a sleeping male polar bear to reach food (we see a bloody carcass as they tug on it), the male wakes up, charges and growls and the three intruders run away.
► A polar bear approaches a ring seal pup that is left exposed, but the pup slips into the ice just before the attack. A polar bear approaches a herd of walruses, a pup is whisked away by its mother and another female fends off the polar bear (there are no injuries).
► A mother polar bear is frightened for her cubs' safety when she sees a male polar bear in the distance; the male spots them and charges while growling, but then stops. A mother polar bear must drive her cub away in order for them both to survive, and she snarls and appears aggressive, causing the cub to run away.
► A small polar bear tries to eat from the kill of a larger polar bear, the larger one lunges at and growls at the smaller one several times, the small one keeps coming back trying to eat, and eventually it is allowed.
► A walrus pup wanders away from the herd, slips and is trapped on a narrow shelf and a polar bear is looking at it; it jumps into water below (hitting a rock) and then swims away.
► Walruses swim out to open sea to find a larger ice flow for all of them (they swim for weeks). A polar bear swims out to sea to find thicker ice that it can hunt on and it nearly drowns from exhaustion. A small fox that has been following polar bears and picking up their leftovers, is left behind when a polar bear swims away.
► Walrus fight when their ice raft has become too small for all of them (they shove each other and poke each other with their tusks but we don't see any injuries). A polar bear cub slips into a hole in the snow a couple of times and yelps. A fox stalks young birds that aren't ready to fly yet (they do eventually fly away to safety). Walruses feed in a clam bed.
► We hear that arctic storms are more fierce than usual, with stronger winds and more bitter temperatures. We hear that the arctic ice is not as solid as it usually is, that polar bears cannot hunt on to it and that it is taking far longer for the ice to come and therefore polar bears are starving. We hear that a walrus pup will get too cold and drown if it does not learn how to pull itself out of the water and onto ice flows. A ring seal pokes its head out of a breathing hole and we hear about the ferocious predators that might be waiting for it. We hear that a polar bear mother stays in the "birthing den" with her cubs for 6 months with no food or water. We hear that if things do not change by 2040 the frozen seas and the animals that rely on ice to survive will be gone.
► Walruses flatulate and burp loudly in a couple of scenes. A walrus sleeps on its back with its mouth open and we see saliva and slime in its mouth and dribbling down.

MESSAGE - We have to change our ways and start protecting the environment or the animals of the arctic will die off. 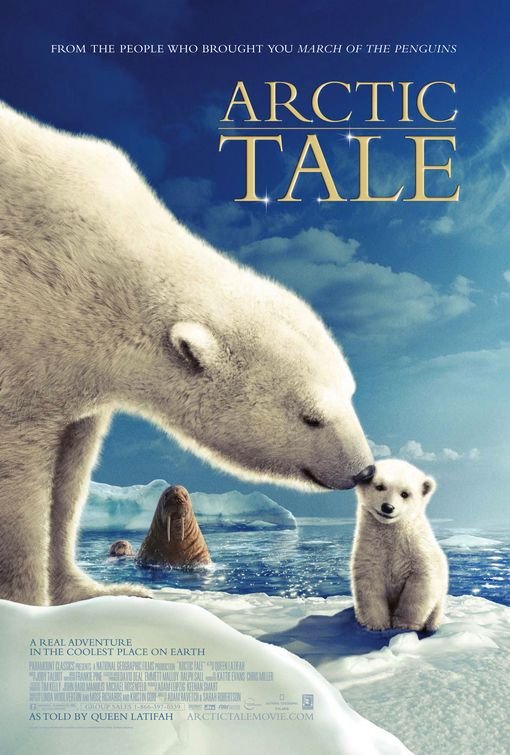