Why is “Apollo 10½: A Space Age Childhood” rated PG-13? The MPAA rating has been assigned for “some suggestive material, injury images, and smoking.” The Kids-In-Mind.com evaluation includes a brief kissing scene, several suggestive images and discussions of sex, television footage of the Vietnam War, discussions of assassination and poverty, discussions of the Apollo 1 tragedy, corporal punishment, many arguments, and some strong language. Read our parents’ guide below for details on sexual content, violence & strong language. This animated film is loosely based on the 1968-1969 childhood years of director Richard Linklater (voiced by Jack Black as the adult narrator and voiced by Milo Coy as the fourth-grade boy): Two NASA officials (voiced by Glen Powell and Zachary Levi) recruit a boy for a top-secret mission to help beat the Russians in the Space Race. Also with the voices of Lee Eddy, Bill Wise, Natalie L’Amoreaux, Jessica Brynn Cohen, Danielle Guilbot, Josh Wiggins and Sam Chipman. Directed by Linklater. [Running Time: 1:38]

– A man and woman kiss goodbye briefly one morning, and in another scene, they hold hands briefly. A young boy stares at a picture on an album cover of a woman covered only in whipped cream from just above the nipples to the seat she is sitting on; she is licking whipped cream from a finger and looking seductively at the camera.
► A man says that Catholic neighbors “pop out a kid every year” and we see eight children in the family; he says his own mom “got on the pill” and feared excommunication from the church. Two young boys at a drive-in movie look for couples making out in cars and say they found such a couple because a tail light was flashing; we don’t see the couple. A fourth grade boy can’t decide if a longhaired individual is a man without facial hair or a woman.
► A poster in three boys’ room shows Raquel Welch wearing a skimpy animal skin that reveals cleavage, and legs to the upper thighs; a man enters the room, opens a dresser drawer, pulls out a stack of Playboy magazines, looks angrily at the boys, and walks out with the magazines (a woman wearing a bikini is shown on the top cover and cleavage, bare abdomen and legs to the hips are seen). A woman wears crop tops that show a portion of her abdomen. Preteen boys and girls at a beach and a pool wear either swim trunks or one-piece swimsuits, while younger girls wear bikinis and tiny skirts around the bottoms and one teen girl wears a bikini that bares shoulders, arms, cleavage and thighs.

– A teen girl tells younger children that “Lucy in the Sky with Diamonds” means LSD. A man carrying a can of beer walks across the background in his living room, a man drinks a can of beer while driving two of his preteen children somewhere (he crushes the empty can and tosses it on the floorboards), a man at a party pours champagne for adults and teens and we see a woman and a teen boy and girl sip from their glasses while a bottle of champagne is shown in an ice bucket, and a man tells other men that they can have beers in a bar but the young boy they are training can only have Coke. Two women and two men smoke cigarettes at home and we see substantial cigarette and cigar smoke, a school secretary smokes around children, Janice Joplin smokes on TV, three scenes include dozens of NASA control room workers with ashtrays at their desks and we see lots of whirling smoke, and a teen boy wearing a Yeti costume removes the head and smokes a cigarette.

– The Space Race and Cold War years in America were dynamic times of both fear and hope. 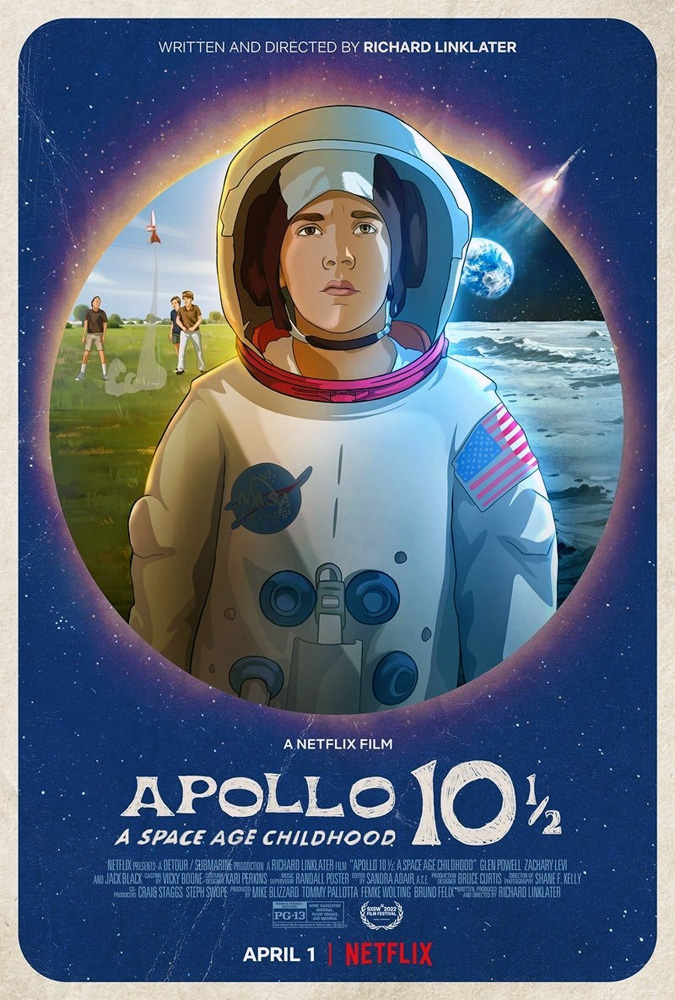