Why is “Animal Crackers” rated TV-Y7? The TV Parental Guidelines Monitoring Board rating indicates that “this program is designed for children age 7 and above.” The Kids-In-Mind.com evaluation includes a couple of kissing scenes and some cleavage revealing outfits and circus costumes, a fire in a circus that causes the deaths of two people, a few fight scenes with no injuries shown, a few scenes of risky circus acts, several scenes of people being turned into animals, and some mild language and name-calling. Read our parents’ guide below for details on sexual content, violence & strong language. Animated feature about a man (voiced by John Krasinski) that inherits a failing circus after it suffers a fire and loses all its animals. Along with his wife (voiced by Emily Blunt), they must find new animals, a way out of bankruptcy, and an escape from the clutches of an evil circus-grabbing uncle (voiced by Ian McKellen). A magic box of animal crackers may help. Also with the voices of Danny DeVito, Sylvester Stallone, Raven-Symoné and Patrick Warburton. Directed by Tony Bancroft & Scott Sava. [Running Time: 1:45]

– A man and a woman kiss briefly in three scenes. A woman kisses an unwilling man for several seconds in two scenes. A man proposes to a woman with a clown’s red nose in a circus ring after saying, “I love you” and the woman accepts.
► A woman wears a scoop-neck leotard and a miniskirt as she waddles across the screen and her cleavage and hips jiggle. A woman wears a low-cut top that reveals cleavage. A man wearing a business suit makes his pectoral muscles move to make bulges in the material.

– Four men start a short fight in a memorial service where men and women jump, slap at, and shove one another, but no one is hurt. A man gets into a scuffle with a dog and a cat and accidentally starts a fire that burns down part of a circus; we see some flames and ashes, and we hear that a man and a woman died in the fire. A woman chases a man around a room, and then jumps on him; he disappears under her, but we hear him groaning, and he looks fine later.
► A woman gives a man a box of magic cookies that turn people into talking animals in circus acts: A man eats a magic cookie, turns into a hamster, and a woman slaps him with a purse several times (no injury occurs). A man/hamster eats cookies and turns into several kinds of large animals to perform: horse, tiger, rhino, elephant and hippo; as a horse he jumps off a high dive, eats another cookie, and turns into a fish to land in a small fishbowl. A man in a factory eats a cookie to become a mandrill and another man eats a cookie to become a lion that chases the primate out of a window (it falls but is unharmed). Four men eat broken cookies and mutate into animal-human hybrids, including a bull, an alligator, a large frog, and a bunny; and in a circus scene, the mutations fight with other animals, slapping and throwing things like knives that bounce off a turtle’s shell until the other animals subdue the mutants and lead them away, tied in thick ropes. An elderly man eats broken magic cookies and turns himself into a chimera with a ram’s head, bat wings, and six legs while other performers eat cookies and become a host of circus animals that chase the chimera; a fire-eater breathes fire and then becomes a reptile that breathes fire, animals shove and slap at one another, a man shot from a cannon becomes a rhino that pins a man to a wall and then shoots out the tent roof while holding the chimera, the chimera hits the floor with a loud thud followed by a lion that revives and captures the chimera in a large net after a woman becomes an elephant and slams the chimera to the floor again, and a man feeds the chimera a cookie to change it into a hamster. A toddler eats a cookie to become a climbing monkey that catches a falling cat and brings it to safety. A man eats a cookie and becomes a large, smiling purple dragon that breathes smoke and a little fire. Boys and girls at a circus eat a type of cookie that gives them instant animal face-paint that disappears when they burp.
► A man and a woman argue several times. Two men argue twice. A man argues with a primate, and later, with a lion. A man shouts at another man several times and slaps him in the back of the head twice. Two men fall in love with a woman who chooses one of them to marry; the other man becomes angry and vows revenge.
► A man in a chase scene jumps his motorcycle over pickup trucks and cars, ending up in a pile of manure, but he is unhurt. A man is shot from a cannon, falls onto a floor unconscious, but awakes unharmed. A monkey’s buttocks catch fire inside a large dough machine, but he is ejected and slides on a floor to put out the fire. A giraffe is shocked by a light bulb, temporarily glowing and revealing a skeleton.
► A toddler girl says she is scared of monsters at night and her father protects her by becoming a bear to sleep in her room (no monsters appear). A tiger roars at a circus audience and men and women gasp, but no harm occurs. A man practices golf swings in an office and knocks a picture from the wall, unbroken.
► A man vomits in a street and we see something brown on the pavement. A taste tester at a dog biscuit factory gags with every taste and often turns blue and gags; he vomits brown material once onto the ground. A woman tastes a biscuit and turns blue, gagging. A large machine spews gooey dough all over a group of people. Several cookies disappear down a toilet. We see a memorial service in a tent where a clown cries loudly and another clown flatulates, burps, and makes a raspberry sound. Boys and girls at a circus burp loudly. A bear snores in a bedroom.

– A loving family can bring you through hardships and fulfill dreams. 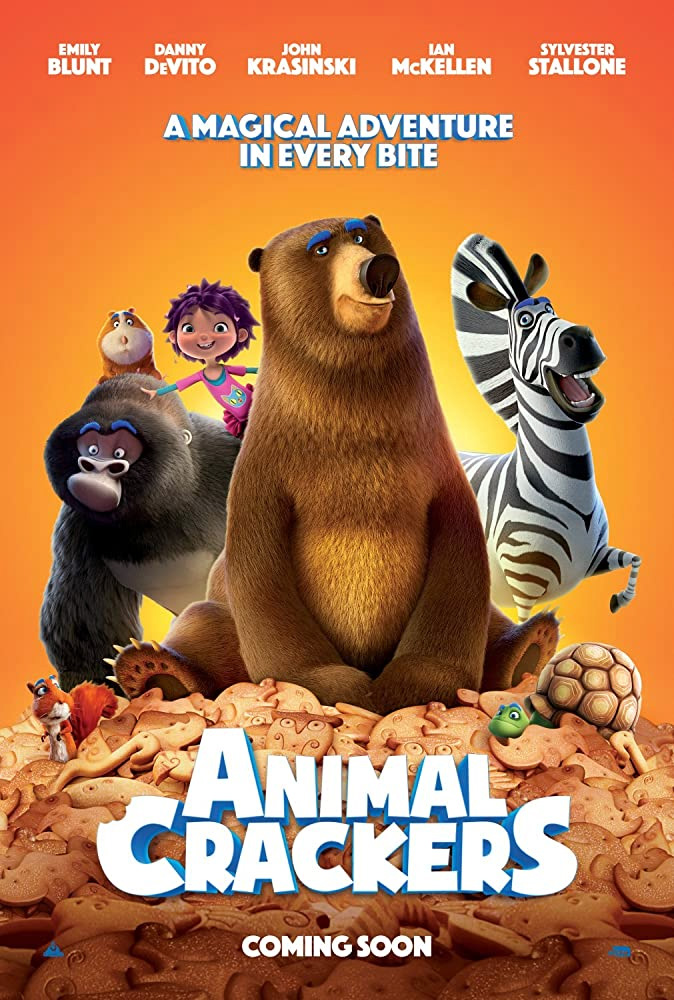