Sequel to the 2006 thriller "The Da Vinci Code," and also based on a Dan Brown novel: Tom Hanks reprises his role as a famous symbologist, who this is called to the Vatican to help uncover an anti-Papal conspiracy that may involve a secret, centuries-old group called the Illuminati. Also with Ewan McGregor, Ayelet Zurer, Stellan Skarsgård, Nikolaj Lie Kaas, Armin Mueller-Stahl, Pierfrancesco Favino and Victor Alfieri. Directed by Ron Howard. [2:18]

SEX/NUDITY 1 - A man and a woman hold hands and pretend that they are married.
► A man talks about a man "chopping off the manhood of statues" and replacing them with fig leaves later (we see several nude male statues with fig leaves at the crotch).
► A man wearing a swimsuit is shown bare-chested and a woman wears low-cut tops that reveal cleavage in several scenes.

VIOLENCE/GORE 7 - A man hangs with his hands chained to a ceiling and his legs dangling over a large fire, the flames lick at his feet, we see a bloody burned brand on his chest, he screams and squirms, he is lowered closer to the flames, he screams and eventually is engulfed in flames. A man sets himself on fire (we see him in flames and we hear sizzling), the man screams and thrashes and then falls to the floor dead still in flames.
► A man that's slumped over and motionless is found in an underground chamber; another man approaches the body and we see a rat eating the body: the skin is tinged purple, the mouth is wide open and there's a bloody burned brand mark on his chest. We see a man being branded on the chest with a hot branding iron (we hear sizzling and he screams).
► A woman sees blood smeared on the chin rest of a security access panel, sees a human eye with blood on it on the floor, enters a laboratory and finds a dead man (we see blood on his chest where he has been shot or stabbed and a bloody eye socket from where his eye had been cut out).
► A man who has been stabbed falls to the ground (we see a great deal of blood pooling under him), he rolls over, we see a bloody burned brand on his chest and we see that he has two puncture wounds (holes made through to his lungs); a woman tries to do mouth to mouth resuscitation, blood spurts out of the holes in the man's chest and the man dies.
► Two men are locked in an archive room, the power is cut, there is no air circulating into the room, the two men struggle to breathe as the air runs out, one man collapses, and the other man tries to shoot the window out and becomes unconscious (they are OK eventually).
► A man pulls a fire extinguisher off a wall and is struck by the spray (he appears to be killed by whatever was in the canister). A man is shot at close range (he falls to the floor dead). A man's throat is slit (we see the blood begin to seep at the cut line and he gurgles and falls to the floor dead (we see his body again later with blood on him and the floor). A police officer approaches a parked van, the officer is shot twice and pulled into the van, and another officer is shot in the chest and then in the head (we see blood splatter). A man is shot twice, falls to the floor (we see blood on the wounds and in his mouth), coughs blood and dies. Another man is shot (we see blood on his wounds).
► A man with a gun threatens a man and a woman. A man sprinkles powder into an open gunshot wound on his shoulder, he moans and writhes, injects himself several times around the wound, and then bandages himself. We see a dead man in a coffin with badly discolored skin, his mouth is wide open and his tongue is bloated and black.
► A man strapped to a hand trolley that is weighted down is rolled into a fountain, he is submerged and begins to drown; another man tries to help him but cannot lift the trolley (he is eventually OK). A man is shot at repeatedly and crawls away through a small door that leads into a cavern (we see many human skulls on the floor and all around the walls).
► A man starts his car, and the car explodes with the man inside (we do not see the man after the explosion). The blast from an explosion causes people to fall to the ground and buildings to begin to crumble.
► We hear a news report about the death of a Pope, we see many people mourning and several people carry the body around the crowd for a viewing (we see the body being carried on a stretcher). We see a human skeleton behind a metal framework in a passageway in a dark chapel.
► A man flies a helicopter high into the sky and out of sight and the helicopter explodes. Security forces with guns drawn enter a church and search. A man and a woman walk through dark passageways and find small cells where people had been held captive. A man parachutes toward the ground where many people are gathered, a large explosion pushes the man into the roof of a building, knocking him unconscious and he crashes hard to the ground (we see him with bruises and cuts on his face). A man rappels down the side of a building. People protest while marching near a church, they argue and a fight breaks out (we do not see anyone injured).
► A man talks about men being branded with the sign of the cross and then executed. A man tells another man that, "We will hunt them down and kill them." We hear that four men have been kidnapped and threatened with execution. A man threatens to kill four men and blow up a city. A woman talks about an impending explosion that will be large enough to destroy an entire city. We hear a news report that a dead man was a mugging victim. A man says that he was orphaned at a young age.
► We watch a scientific experiment that creates anti-matter particles (photons move rapidly and collide causing bright lights to flash and shoot through tubes). A woman tears out a page from a book, which is a valuable artifact. We see a statue with half its face angelic and half its face demonic.

SUBSTANCE USE - Cardinals are shown smoking cigarettes, a man asks another man if he smokes, and a man smokes a cigarette.

MESSAGE - The Vatican is not immune from worldly conspiracies. 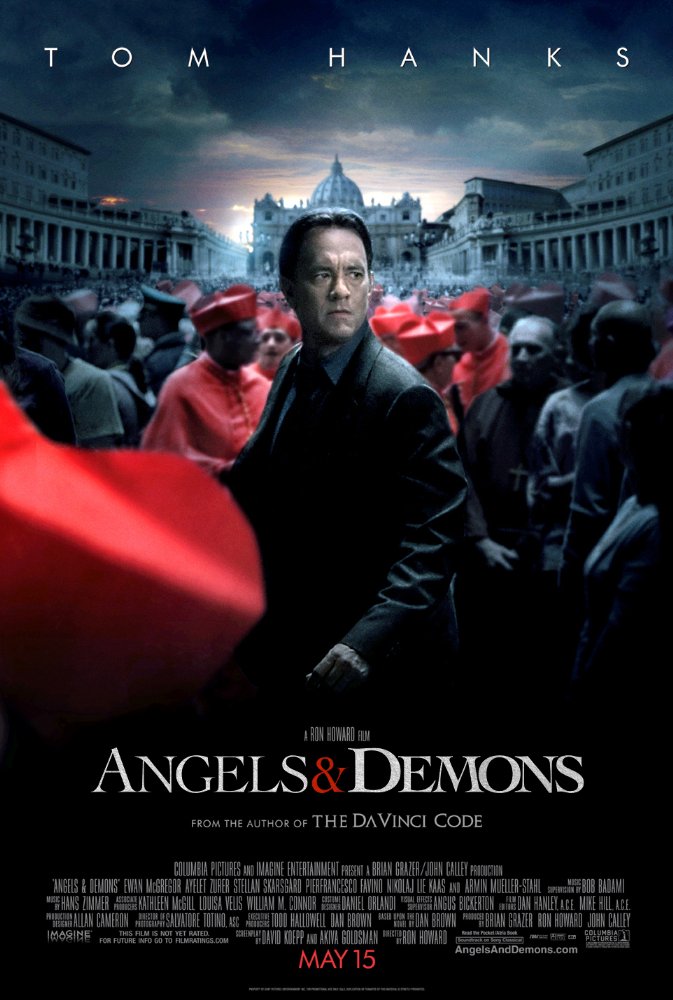