Set in 1970s San Diego: TV news anchorman Ron Burgundy (Will Ferrell) is a local celebrity, although his expertise is really nothing more complicated than reading a teleprompter efficiently. His life and career plans are disrupted when an ambitious female newscaster (Christina Applegate) who actually knows a thing or two about real journalism joins the all-boys news team, and the two develop romantic feelings for one another. Also with Steve Carell, Kevin Corrigan and Chuck D. Directed by Adam McKay. [1:31]

SEX/NUDITY 6 - Two men act as if they are having sex: one man in his underwear thrusts behind another man whose pants are unfastened (this scene plays as the credits run). A man has an erection while talking to a woman and she remarks about it. A man and a woman lie in bed together after having had sex (she wears a slip and he is bare-chested), and a man and a woman kiss. A man talks about having had sex with a woman while he was on the air doing a news broadcast. A man kisses and licks his dog. A man kisses a man on the forehead. A man and a woman kiss passionately, they lie back on a bed, and she says to him "take me to pleasure town," and "do me." A man describes his first love and says, "we made out for hours." A man says to a woman "I want to be on you" a few times, a man says, "I am very aroused." A man talks about doing a "no pants dance with a woman." A man admires a woman off-camera and says "don't wear a bra next time." A man invites a woman to have sex with him, another man invites a woman to a "party in his pants," and he then invites another man. A man tries to touch a woman's breasts, and a man talks about a woman's buttocks and makes crude sexual remarks and gestures. A woman propositions a man and draws attention to her breasts, and a woman invites a man to join her (presumably to have sex). A man talks about his son having seen pornographic material. A man talks about a man and to a man in romantic terms, in several scenes: in one scene, he says that he misses the man, that he misses his scent and caressing his arm; and in another scene, he touches the man's shoulder affectionately. Men talk about being able to have sex with whomever and whenever they want. A man is bare-chested while lifting a weight and trying to impress a woman. A woman wears an off-the-shoulder dress that reveals cleavage. People wear swimsuits (bikinis and trunks) and a handful of people are shown in underwear (women in bra, panties, garters and stockings and men in jockey shorts or boxers). A man in jockey shorts thrusts his hips toward a woman. A woman's top is unzipped to reveal cleavage. A man talks about having named his private parts. A man sits on a toilet in a restroom with his pants around his ankles. A man touches a woman's hand.

VIOLENCE/GORE 5 - Several groups of men face off with weapons, they charge each other and we see people being punched and kicked; one man is thrown through the air, one man runs in flames, one is dragged in a net behind two horses, one man is hit by a pitchfork in the chest, and one man's arm is cut off at the elbow (we see the bloody stump). A man throws a burrito out his car window knocking a man off his motorcycle and sending him skidding along the pavement (we see the man with a bloody scratch on his face). A man kicks a dog off a bridge and into a river below. A man shoves a woman into a bear den, another man jumps into the den followed by three others, and they fight with the bears with punches and kicks; we see one man held in a bear's mouth being slammed against rocks, and a bear tears a man's arm off (we see no blood or gore, just his torn jacket sleeve). A man throws a woman over a desk, she throws a typewriter hitting him in the head, she tackles him to the floor, straddles him, sprays him in the face with mace, and hits him on the back and arm with a TV antenna repeatedly. A woman punches a man in the crotch. A woman slaps a man in the face and shoves another. An angry mob surrounds a man, one person throws something at him, and others yell insults at him. Two groups of men threaten and insult each other, and one man lunges at another and threatens to hit him. A man runs along a sidewalk and knocks a man down to the ground. A man holds a ladder where a man is standing and threatens to push it. A man talks on the phone to his son who is holding his school band at gunpoint. A man in a drunken stupor falls off a stool. A man talks about a man eating like a wolf and letting blood drip down for the children to drink. A man walks across tables in a restaurant and breaks dishes. A man has a gun at a party and flashes it. A man talks about a woman's menstrual period attracting bears.

SUBSTANCE USE - People are shown drinking alcohol and smoking cigarettes. A man talks about his son having done acid while in school. People talk about being hung over.

MESSAGE - People who read news do not necessarily know or understand anything more than their audience. Eventually real ability can help one prevail over celebrity. 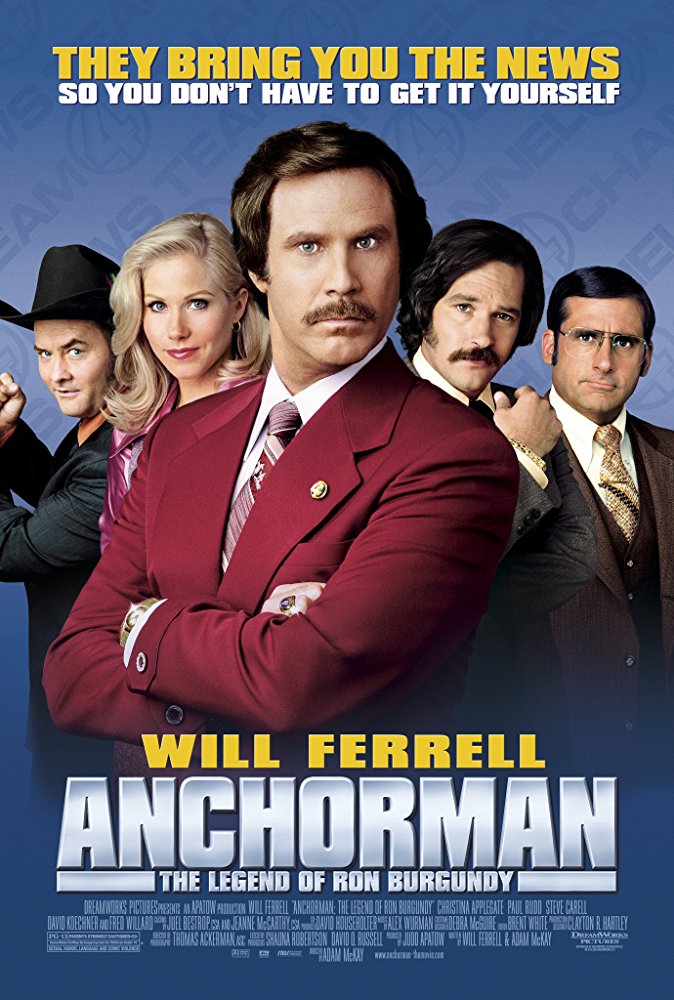