The Alamo, originally a Spanish Mission, became the site of one of the bloodiest standoffs in the spring of 1836 between 200 Texans (or Texeans, as they originally called themselves) led by Colonel William Travis, James Bowie and Davy Crockett and the Mexican army led by General Santa Anna. With Dennis Quaid, Billy Bob Thornton, Emilio Echevarria, Jordi Molla and Patrick Wilson. Directed by John Sayles & John Lee Hancock. [2:17]

SEX/NUDITY 2 – A man and a woman kiss tenderly, a woman kisses a man on the cheek, and a man remembers kissing his wife (we see them kissing in silhouette). A much older man walks into a room where a young woman waits in a bed (she appears frightened) wearing a low-cut dress that reveals cleavage; he closes the door behind him and it is implied that they have had sex. Men and women dance. A woman wears a low-cut dress that reveals cleavage and bare shoulders in a couple of scenes. A man says “We hear men and women bathe together in the open [in Texas].”

VIOLENCE/GORE 6 – There are several battle scenes: Texans and Mexican soldiers fire guns back and forth at each other, many men fall, we hear bullets whizzing and thuds when they hit, cannons are fired, and many men fall. Many cannons are fired on the Mexican army and barricades splinter, men are tossed into the air, and soldiers scatter. A cannon is fired, and it hits the side of a building sending rubble and dust in the air (horses and men retreat). Many cannons are fired into the Alamo; walls crumble, beams splinter, men are tossed into the air (this happens in a few scenes). Mexican soldiers with bayonets fixed march toward the Alamo where Texans sleep, they attack a lookout stabbing him (we hear a squish and a groan), they charge toward the fort, Texans inside fire on them, shooting back and forth. Texans are hit with bullets, stabbed with bayonets, cannons are fired hitting many Mexican soldiers at a time, we hear people screaming, a large explosion tosses Mexican soldiers in the air and we see several bodies dangling from a nearby tree. Mexican soldiers climb ladders and are shot or stabbed as they try to climb over a wall, Mexican soldiers with hatchets begin hacking at a wall, a thatch roof is set ablaze, many more men fight hand-to-hand, one Texan jumps in a hole and three Mexican soldiers shoot him, and a man is shot in the head. A man gasps and dies with blood on his chest and mouth. Texans charge a Mexican camp, guns are fired, cannons are fired, men are hit and fall to the ground dead, Mexican soldiers run and are chased and killed, and Mexican soldiers run into a stream where they are shot and stabbed (we see one body floating in blood-tinged water). A man is shot off his horse, and an officer is hit in the face with a gun butt and beaten repeatedly with guns. A Texan is stabbed repeatedly in the abdomen and chest (we hear squishing and crunching as he thrashes and groans) and we see him dead with blood-soaked clothing. Mexican soldiers capture a group of rebels, line them up, and a firing squad executes all of them (we hear the shots, we hear women screaming and see the bodies crumple to the ground). Texans investigate a shelter, one Mexican soldier is shot, and another raises a sword and is also shot. An injured Mexican soldier turns over, we see blood in his mouth and watch him die. A Texan on his knees and with his hands tied screams as Mexican soldiers charge him with bayonets (we do not see him get stabbed). A Texan shoots the epaulet off a Mexican officer’s coat from a great distance. Two men argue, one shoves the other, and they insult each other. Two men yell at each other, one pulls a dagger, another man enters the room and pulls a really large knife (a Bowie Knife). A Mexican soldier holds a dead comrade in his arms and grieves. We see many, many dead bodies (soldiers and volunteers) scattered around a town and a field (most bodies are shown with blood, some dried, some running) and watch other soldiers dragging some bodies away. A cannon is fired, the ball lands and fizzles but does not explode, a man cuts the fuse off, loads the ball in a cannon and fires it back at the enemy. Texans with guns investigate noises in a field and find other men with guns (no shooting occurs). A man describes an encounter with a group of Native Americans, and describes setting a cabin on fire with people inside, and listening to them screaming. A man says of an enemy “I cut his heart out.” A rider charges into a camp yelling “They’re all dead. The Alamo has fallen. It’s a massacre,” and people in the camp scream in shock. People panic and run when the Mexican army approaches the Alamo. A man threatens to break a man’s bones. We hear that a man’s wife is dead, but do not get details. A man walks into a building and we see bullet riddled walls. A flag reads “Death to Traitors.” A man coughs violently several times, he spits blood on a handkerchief and he says that he suffers from consumption and typhoid pneumonia. A man collapses from a fever (we see him quaking and delirious). A man hacks at meat with a cleaver and we see blood. A man tosses a very large knife from hand to hand. People flee and set their town on fire leaving nothing for the enemy.

SUBSTANCE USE – People are shown smoking tobacco and drinking alcohol.

MESSAGE – Without blood and tears there is no glory. 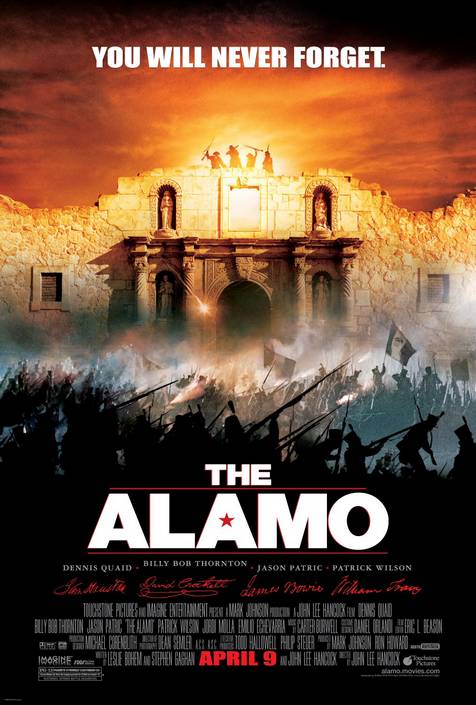