Why is “Aladdin” rated PG? The MPAA rating has been assigned for “some action/peril.” The Kids-In-Mind.com evaluation includes a couple of kissing scenes, several cleavage and abdomen revealing outfits and a large shirtless genie; a man is shown stealing in a couple of scenes, there are several scenes of magical beings and occurrences, several falls that do not end in injury, and encounters with unscrupulous people that threaten other people’s lives; and some name-calling. Read our parents’ guide below for details on sexual content, violence & strong language.” Disney live-action remake of the 1992 animated Aladdin, both based on the book “1001 Arabian Nights”: a poor thief (Mena Massoud) is granted three wishes when he frees a powerful genie (Will Smith) by rubbing a magic oil lamp and the unlikely partners experience a series of adventures as the young thief pursues true love. Also with Naomi Scott, Marwan Kenzari, Navid Negahban, Nasim Pedrad and Billy Magnussen. Directed by Guy Ritchie. [Running Time: 2:08]

– A man and a woman kiss briefly. A man and a woman kiss for several seconds and the scene changes to their wedding as the kiss continues a few seconds longer.
► A woman tells a man that she wants to have two children. A man tells another man sarcastically that perhaps a Sultan will let the second man be his wife. An elephant parade shakes the ground of a city, spilling spices and rattling cups; a prince descends from the elephant and says he wants to buy a princess, who becomes annoyed and walks away.
► Many scenes include a giant bare-chested genie with blue skin; in one scene he lifts weights and instantly develops muscular shoulders, arms and chest. A man changes into a shirtless genie with muscular chest, shoulders and arms. A few women wear long dresses with necklines that reveal cleavage and tight bodices that emphasize breasts and small waists. Dozens of women dance wearing long pants and cut-off tops that reveal bare abdomens and backs. About 10 belly dancers wear short jackets that reveal bare abdomens and long pants or skirts; they swing and circle their hips several times. A man dresses as a woman and dances wearing veils and lipstick.

– A man steals from merchants and men chase him and his pet monkey in two sequences through streets and across rooftops: an older woman shakes a stick at the thief, two man fall off scaffolding (both are unhurt), the thief rappels down a wall before climbing over another wall and falling onto a pile of soft bags, and with a woman they safely jump from a ledge onto a padded flat roof.
► Men grab another man and take him to a desert where another man orders him to go to a dangerous cave. A cave entrance is shown as a stone lion’s head that growls, speaks in a deep, loud voice and shows fire in its eyes. A man in a cave falls screaming through a trap door, hits a stone slab, groans and gets up.
► A man is tied into a chair and placed on a balcony; another man pushes him over the edge and into a body of water where the victim struggles and becomes unconscious until a magic carpet drops a lamp into the water and the man touches it bringing forth a genie that takes him to the surface, where he coughs up a lot of water.
► A man is sent by a spell to a snow-covered mountain, where he and a monkey slide down screaming until a flying carpet catches them and flies them to a city where a giant monster macaw roars and chases a man and a monkey across rooftops (they escape). People run and shout as a man knocks down another man, who gets up and screams from a balcony to create a dark, loud thunder and lightning storm. A genie changes a man into a firestorm that creates another genie; the new genie shouts angrily, grabs a macaw and they are sucked into a lamp as a prison that is then sent to a faraway cave.
► A man throws another man down a well and the victim screams, but we do not hear him hit bottom. An extended sequence shows a man demanding that a genie make him sultan and then into the most powerful being in the universe; the genie creates smoke, sparks, wind and an explosion of smoke and thunder causing a sultan’s clothing to appear on the man and a cobra slithers forward in close-up to turn into the man’s scepter that he pounds on the floor and a man, a woman and a younger man fall to their knees in turn, groaning in pain; the younger man changes from a prince to a man wearing old clothing and he grabs the scepter and breaks it to pieces, and two men grab a woman and lead her away but they evaporate into smoke as do four other men standing nearby as the woman sings and shouts.
► A man shouts at another man. Two men argue loudly and one of the men puts the other man into a temporary trance with a glowing scepter in two scenes. A man shouts at an older man several times and belittles a woman, telling her to stay in her place. A man berates a younger man sternly. A woman shouts at a man. A man calls forth a genie, who yelps as he hits his head on an arch but is uninjured. A man is locked in a dungeon and a key is brought to him by an animal.
► A man finds a sentient magic carpet and frees it from under a stone; it flies around the room and the man climbs a tall column and takes a lamp from it as fiery lava flows from the walls, forcing him to run toward the camera; he and a monkey fall on a ledge and another man takes the lamp and steps on the man’s hand until the magic carpet catches the man and monkey and flies them outside as the other man screams. A man jumps off a balcony and is caught by a flying carpet; a woman does the same thing later. A horse rears at a group of children and a man runs to push the kids out of the way. A monkey smacks a man in the face. A pet tiger growls at several people and swats at a macaw (there are no injuries). A tiger roars angrily at a man.
► A man cleans an oil lamp and a large genie floats out in blue smoke, white lightning and sparks; the genie casts a spell to make a monkey play drums and a trumpet and makes a group of soldiers appear and swing swords to music. A genie appears in a puff of smoke and sparks from the spout of an oil lamp and offers to grant three wishes to a man. In several scenes, a genie has a sparkly tornado instead of legs, with the funnel changing into legs. A genie turns into a man several times and back into a genie. A genie becomes several genies singing together. A genie changes briefly into a mummy. A man and a genie argue briefly and a path of fire appears as the genie runs through sand, but it goes out quickly. A genie changes a monkey into a donkey, a camel and an elephant. Smoke swirls and disappears and a genie becomes a man.
► A man shouts at a pet macaw. An elephant parade shakes the ground of a city, spilling spices and rattling cups; a prince descends from the elephant and says he wants to buy a princess, who becomes annoyed and walks away. A man sniffs a man and grimaces, indicating a bad smell. A woman levitates for several seconds, caught in a spell.
► A woman says her mother died. A man says both his parents died when he was young. A man says that he killed many people and spent five years in jail.

– A man holds a Martini with large olives and begins to sip it in a couple of scenes (the camera cuts away before his lips touch the glass), and a depiction of a man holding two martinis on a tray is seen in a thought bubble above his head.

– One can turn around a difficult life and create success with the magic of friendship and love. 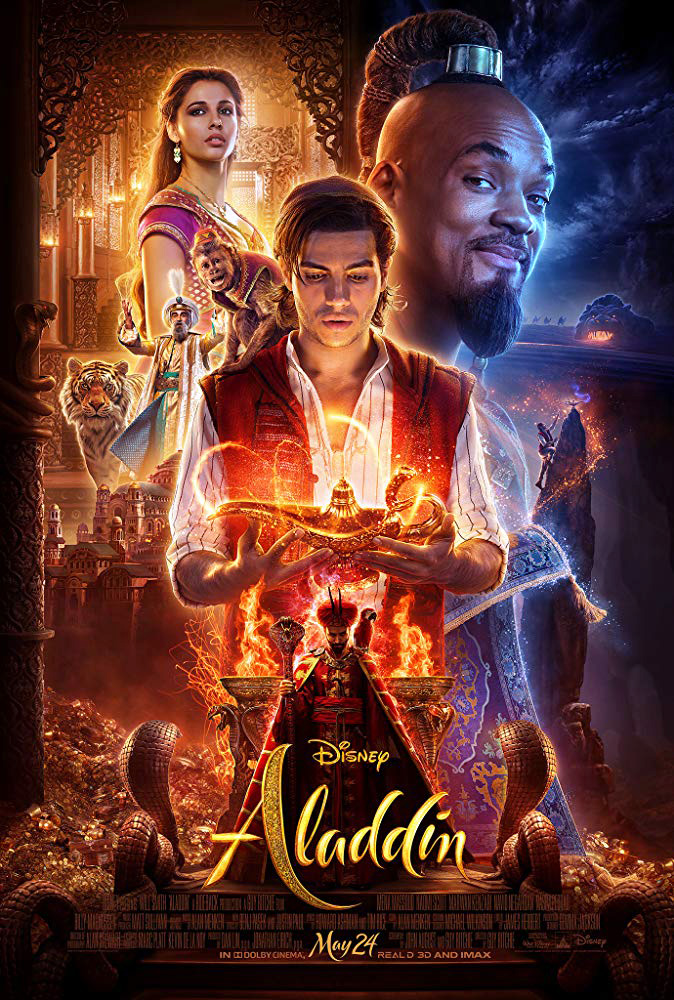