SEX/NUDITY 4 - There are discussions about "lover" robots whose purpose is to please humans; one talks in euphemistic and confident terms about the "services" he provides, and we see one kissing a woman lying on a bed (it's implied that they have intercourse). One robot refers to his endowment while talking to a woman who's looking at his crotch. We see a miniature hologram of a scantily-clad woman and she dances around a group of young men and on the lap of one who reacts with interest. We see and hear about "Rouge City" where all forms of illicit sex take place (what we see is a lot of neon lights, mostly shaped like women's bodies, in a dark carnival-like atmosphere). We see a woman in an evening gown and a night gown, which expose some cleavage. A female robot is instructed to undress in front of a large group of people; she starts to, but stops. A robot boy opens the door of a bathroom where a woman is sitting on the toilet and she scrambles for her pants to cover herself. A boy tries to look into the pants of a robot boy. A story is recounted of a time when a natural catastrophe led to the licensing of pregnancy.

VIOLENCE/GORE 5 - We see a woman lying dead with a puddle of blood by her head. We hear about and see a "flesh fair" where robots are destroyed in all sorts of gruesome ways for humans' entertainment: a robot is shot from a cannon and his face (in flames) sticks to a fence, a robot is melted with acid, a robot is sawed in half, a robot is pulled apart. A boy robot beats another boy robot with a lamp, causing sparks to fly, knocking his head off and smashing his face. A man pokes a pin through a female robot's hand. A woman and a robot boy fight and she pushes him down to the ground. A robot boy tries to cut the hair of a sleeping woman who rolls over and is nearly poked in the eye with scissors. A boy is knocked into a pool and nearly drowns. A robot boy and robot man are threatened with acid. A robot boy is shown lying at the bottom of a pool. Damaged robots appear in dark woods looking for parts; they begin trying on replacement pieces. A group of robots are chased through woods and into a town where they are shot at by men on wolf-shaped motorcycles (they are hit with magnets which pin them to anything metal). A group of robots are trapped in a shack and the men chasing them tear down a wall and throw a net over them (the net is attached to a hot air balloon-like flying machine which carries them away). A robot boy crashes and his face melts down on one side. We see a laboratory with inanimate robot and body parts hanging from hooks and lying on tables. A boy robot steals a police helicopter and flies it recklessly, knocking people and objects around. A female robot's face opens up to reveal circuitry. A robot boy is left to fend for himself in creepy-looking woods. A robot boy sits on the ledge of a tall building and then jumps into the water below. A boy threatens a robot boy with a cake knife. A man is pummeled with some bean bags. A young boy is shown cryogenically frozen in a glass case and there is a discussion of the fact that he may not be able to be revived. A robot boy is shown covered in ice when he is entombed in a sunken helicopter cockpit. A woman is shown with a large bruise on her shoulder. A boy is seen in a wheelchair with an oxygen mask over his face. A woman closes a robot boy in a closet.

LANGUAGE 2 - A couple of mild obscenities and a few religious profanities and exclamations.

DISCUSSION TOPICS - Mechanoids and robots, morality, longing for love, being real, alien life, death of a child and parent, cryogenics, being unique, spirit, the meaning of existence.

MESSAGE - Life, whether mechanoid or humanoid, is not worth living without love. 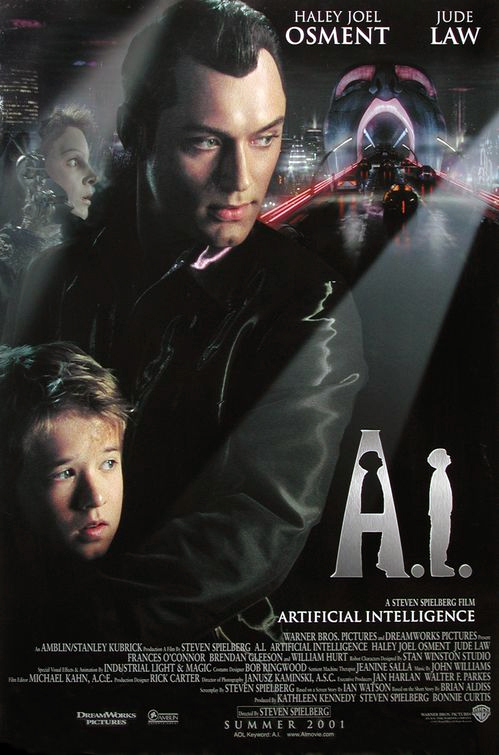