Why is “The Addams Family 2” rated PG? The MPAA rating has been assigned for “macabre and rude humor, violence and language.” The Kids-In-Mind.com evaluation includes a couple of kisses and suggestive references, eerie science experiments, an animated detached hand, a couple of fights, several explosions that leave a boy charred, threats of violence between siblings, humans transforming into animals and back again, and some mild language and name-calling. Read our parents’ guide below for details on sexual content, violence & strong language. When Wednesday Addams (voiced by Chloë Grace Moretz) feels too dissimilar to her family, and her parents (voiced by Oscar Isaac and Charlize Theron) are at their wits’ end, they decide to take a family road trip to bring them together. They are confronted and followed by a scientist’s representatives that insist Wednesday was switched at birth in the hospital and she is actually his daughter. Also with the voices of Nick Kroll, Javon ‘Wanna’ Walton, Snoop Dogg, Bette Midler, Bill Hader, Wallace Shawn. Directed by Greg Tiernan & Conrad Vernon. [Running Time: 1:33]

– A husband dips his wife and kisses her proclaiming his love for her. A husband and his wife dance and she dips him and they kiss. Two very large men charge toward each other growling, and then hug. A boy and a girl hug and she caresses his cheek. A wife kisses her husband’s cheek.
► A husband tells his wife he feels like he has liquid magma all over his body when he touches her. A man’s hologram touches a girl’s shoulder and she looks at his hand trying to brush it off (it does not appear suggestive, but she is annoyed by the contact). A woman talks about making memories and a man says, “Like on prom night.” A boy is obsessed with trying to date someone and attempts to attract girls throughout the movie while his uncle shares dating tips with him; he trips and skins his knee and proclaims that he was falling for a teen girl that scoffs at him. A man tells another man, “Your tentacles are hanging out,” and the man replies, “Don’t kick ’em, they are very sensitive.” A man says that he is going to a “hug a biker” gathering. A man tries to propose to a woman three times and they are interrupted by a traumatic event each time (she eventually accepts).
► A boy’s and a man’s underwear are pulled up out of their pants as they are lifted into the air. A man wearing only briefs, sits up on a medical table and we see his bare chest, abdomen and legs to the hips (we see him in his briefs again later). A woman wears a form-fitting dress throughout the movie that reveals cleavage and the outline of her hips and buttocks.

The Addams Family 2 SUBSTANCE USE

– A man says that a lion and another character “hit the catnip pretty hard last night” and we see them both sleeping, and a gas fills a room and knocks three people unconscious. People drink in a bar scene.

– Fitting in, being different, being a winner, aggressive people, childhood trauma, human behavior, scientific advancement for good vs. evil. 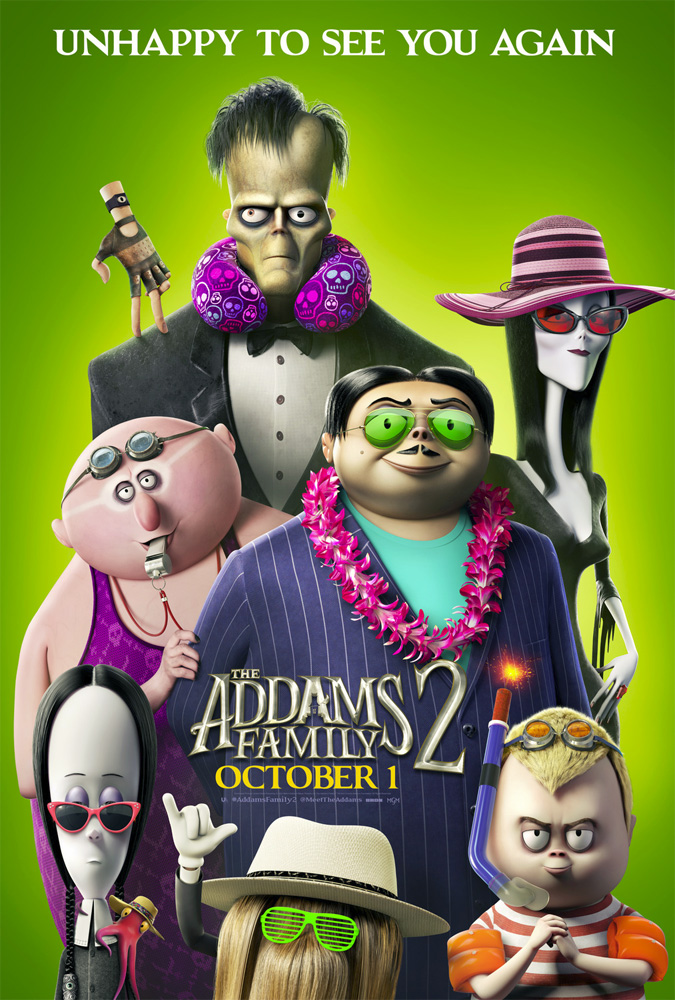