A man (Hugh Dancy) struggles with Asperger’s syndrome, an autism spectrum disorder that confuses communications and relationships. Adam’s chosen form of escape from resulting tensions is his space suit and discussions of space exploration, his favorite topic. However, he meets an interesting teacher (Rose Byrne) and hopes to make a go of a relationship with her. Also with Peter Gallagher, Amy Irving, Frankie Faison, Mark Linn-Baker, Karina Arroyave, Maddie Corman, Adam LeFevre, Wardlow and Mark Margolis. Directed by Max Mayer. [1:40]

SEX/NUDITY 5 – A man and a woman that are fully clothed take turns massaging each other’s backs on her bed: she turns over, takes one of his hands, kisses it, puts it into her blouse over her breast, he asks if she wants sex and she says, “I do. Take it slowly”; the scene ends and sex is implied.
► A man kisses a woman twice, the scene cuts to her bedroom, where they lie fully clothed side by side, they talk and agree to kiss and hold each other, but not to engage in sex. A man and a woman appear in bed under covers, revealing bare arms and shoulders; he asks, “One more time,” and she says he thinks only of himself and begins asking mock interview questions for his job interview the next day as the scene ends. A woman asks a man to hug her in two different scenes, and he does so briefly.
► A man admits an affair in open court and his wife and adult daughter look angry and shocked. A man with Asperger’s syndrome asks a woman about her sexual arousal at several points during a social conversation, and after watching a raccoon in a park together he asks her, “Were you excited sexually in the park? I ask because I was but wondered if you were too? I can’t tell what people are thinking?” and she replies, “Maybe a little.” In court, a middle-aged man is asked on the stand if he had an affair with a twenty-something woman. In a street scene, a woman in a mini skirt passes in the foreground, while in the background an older man tells a younger man that men should talk about women at lunch and that the younger man should take a neighbor woman out on a date; the younger man replies that the older man should call his old girlfriend instead of missing her for 35 years and the scene ends. A mother tells her daughter on the phone that the feeling of love is important, but the actions of love are more important. A man and a woman break up and she cries briefly. A computerized doll on a workbench of an electrical engineer states, “Adam is the cutest guy in the office.”
► A man in an apartment building laundry room is shown from the waist up, wearing a blazer and no shirt underneath, revealing part of his bare chest. A woman at a party and another woman at a theater each wear low-cut V-necks that reveal some cleavage. In three courtroom scenes, a woman sits in a slit skirt. A man finds a picture of his girlfriend in his closet and it shows her smiling over one bare shoulder. Over a clock on a street, there are three small semi-naked statues; two are children of indeterminate sex and the third is an adult male with a sash over the genitals.

VIOLENCE/GORE 4 – Throughout the film, a man with Asperger’s syndrome is portrayed as having difficulty feeling, expressing emotions and connecting with other people; a constant thread of conflicts and misunderstandings arises, because of his inability to read non-verbal cues, distinguish vocal intonations in others, and verbally communicate in a consistently effective manner.
► A woman says to her boyfriend, “You scared me. I thought you were going to hit me”; he says, “I’d never do that,” the woman’s father joins the conversation and they all argue loudly and call each other names and the two men roll around on the ground in the snow and ice and struggle, still arguing. A man slams his head into a large mirror and breaks the glass, but does not injure himself.
► A man becomes extremely angry when he feels betrayed and yells loudly. An electrical engineer is fired from his job at a computerized toy company, he yells, and is cut off by his boss, who tells him to go talk about it to his father (who is dead), the engineer clenches his fists, shakes, and finally leaves the building. A man walks by an elementary school and stops to watch the children playing kickball; a policeman drives up behind him, asks him for ID, yells at him and slams him against the schoolyard fence and frisks him; when he releases him, the man is visibly shaken, grimacing, and stumbling away as the officer says, “Can never be too careful around children.” At the reading of his father’s will, a man becomes very upset, tensing his body, holding his head, pounding his head with open hands and yelling that he will not move to another house. A woman asks a neighbor to come out for an evening with her friends and he becomes tense, grimaces and looks ill. A man hides in a corner and shakes in fright when a female neighbor knocks on his door.
► A man and a woman argue about her father being indicted for accounting fraud. A man admits an affair in open court and his wife and adult daughter look angry and shocked; later, the daughter cries, the next day the wife calls the daughter and her boyfriend, upset and crying wildly, and the daughter and boyfriend argue loudly and he bangs things and calls her names. A total of 6 court scenes show several people looking angry and upset: two women among the spectators cry briefly and a mother and adult daughter both cry briefly after a loved one was sentenced to two years in prison. A woman arrives home at night and screams because a man in a space suit is washing her picture window and hanging from a cable; seeing that he is her friend, she opens the window and pulls him in, they argue a bit, and then they laugh.
► A man’s father dies and we see him alone at the graveside, with a blank look on his face. In the foreground of two short scenes, we see a shovel filling in a grave with dirt and behind the man we see short gravestones marked Mother and Father. A female voice states that she recalls a children’s story of a little prince that crashes in a plane in the desert, but he and the pilot survive.
► We see a dark restaurant, where patrons wear black clothes and grotesque gold masks with long noses and twisted mouths and the servers wear fake bloody knives through their heads.

MESSAGE – People with Asperger’s syndrome remind us that we all need clarity. 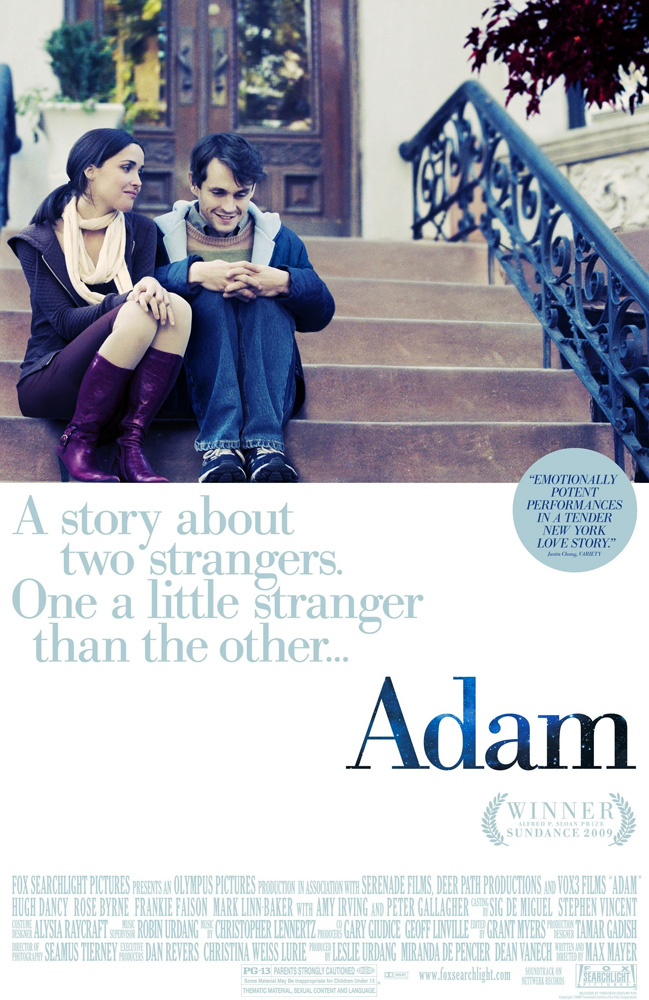