Jackie Chan stars as Jimmy Tong, a chauffeur for a playboy millionaire (Jason Isaacs) who has one rule for the hired help: Never touch his prized tuxedo. But when his boss is temporarily out of commission, Jimmy can't resist trying on the tux. He soon discovers that this particular suit gives the wearer fantastic powers, as he's thrust into the world of espionage, paired with a rookie partner (Jennifer Love Hewitt) who's even less experienced than he is. Also with Ritchie Coster and Debi Mazar. [1:26]

SEX/NUDITY 4 - A woman takes off her dress and tries to seduce a man (we see her in her bra and panties); she takes the man's pants off (we see him in his boxer shorts) and chases him over a sofa, onto the floor and smacks his buttocks several times making remarks like "you like it rough"; and also she invites him to join her in the bathtub (another woman watches this scene on a small camera and we see part of the scene again later). A woman hugs a man, a woman touches a man's knee, touches her own cleavage, they talk in very close proximity making suggestive remarks, and she touches his lips. A woman tries to seduce a man by talking seductively and moving close to him. A man massages a woman's foot and she makes suggestive noises. A woman in a low-cut dress bends over and the camera focuses on her cleavage. Two women in very tiny outfits dance suggestively on stage and at one point they pick up the back of their skirts to show what looks like a thong and their bare buttocks. We see a woman wrapped in a small towel. A man wiggles his derriere in a woman's face, she giggles and touches him, then he turns to face her and wiggles his derriere in a man's face. Women are shown in outfits that reveal cleavage, bare shoulders and backs. Men and woman dance together in a couple of scenes. A woman holds two men at gunpoint and forces them to remove their clothes; we see one man in his T-shirt and boxer shorts. There is some sexual innuendo: a man admires a woman and talks about wanting to go on a date with her, a man flirts with a woman and asks her on a date, and a man makes an off-color remark to a woman; also, a man sings "Sex Machine," a woman asks a man, "what else can you do?" and the man responds, "get on the bed and I'll show you," and a woman climbing up a ladder says to a man following her, "don't look up my skirt." Two men in an observation booth focus their cameras on the behinds of two women taking target practice, and a woman shoots the crotch out of a target drawn to look like a man. A remark is made about a man being gay, and there are a few discussions about the mating habits of bugs.

VIOLENCE/GORE 5 - A man puts a plastic bag over another man's head, fills it with water and we watch the man struggle and drown and fall to the floor. A man drinks some water and he begins to shrivel and dehydrate -- another man tells us that his internal organs are turning to dust. The man falls to the floor with a wrinkled face, collapses in a puff of dust and we see his eyes go white, his suit falls flat on the floor and another man breaks his hand off and into two pieces. We see a dead man on a table with an autopsy scar on his chest. A bomb explodes sending two men hurtling through the air; one man has a very bloody head wound, he falls unconscious and we see him in the hospital with a bloody bandage on his head. Two men fight with lots of super-powerful kicks and punches; one man falls onto a metal floor and his face is burned (we see smoldering and later a scar), he's then knocked backwards by a glass hitting him in the mouth and we watch him literally shrivel up and die from dehydration. Many men fight with a man and a woman, exchanging many fast and furious kicks and punches. A man is flipped over a railing, he dangles from a ledge, a man kicks his fingers making him lose his grip, a woman tries to pull him up, but he falls many stories until he grabs on to a pipe and climbs back up. A woman is grabbed around the throat, she struggles and gets free, but we then see her in a pool, being held underwater. A rope is wrapped around the neck of a man and he fights with several men while being dragged around by the neck; the rope is wrapped around a pipe and through the man's crotch, and the man kicks and punches and flips onto several men. A woman fights several men using punches, kicks, twirls and bites, and a man fights several men just with his legs, kicking some, twirling some and one is kicked out the window and he falls many stories into a swimming pool where he lands on another man. A man aims a gun loaded with a listening device, shoots and hits a man in the head, the man falls off the side of a ship and into the water; the man shoots the gun again and hits the hairdo of a woman. Two men dangle from a release valve: one kicks the other in the face repeatedly and one falls to the floor. A man opens his car door and another man on a bike crashes into it, flips over and lands on the street. A man is punched in the face and knocked off his bike by a man dangling from a cord, a man punches a man in the face, a woman kicks a man in the groin, and a man is tasered on the neck. A man hits and flips a woman through the air and she lands hard on the ground, a man hits and flips a man through the air and he falls to the floor unconscious. A man drives his car into a skateboarder (he's going slowly, but the skateboarder is knocked to the ground). A man is thrown off a ledge and crashes to the floor. A man is thrown into a pool filled with snakes that begin to wrap themselves around his neck, and another man is punched and kicked into a pool filled with snakes. A man strong-arms a woman and grabs her by the neck, and she elbows him in the ribs. A woman punches a man in the face (off-screen, but we hear the punch land). A man dangles from an elevated walkway, jumps to a platform, a pile of pipes tip onto him and he kicks and punches all but one that hits him on the head, and he falls into a truck. A man chases another man and threatens to beat him up; the man being threatened jumps into his car, out through the window, slides across another moving car, and finally hides under his car, where he is squeezed when the other man jumps on top of the car. A fake swimming pool floor opens beneath a man's feet causing him to do a split as the two sides separate. A man drives his car recklessly several times -- in one scene, he is being chased by a skateboard with a bomb attached to it, and he drives through busy streets, nearly crashing into a truck. A man runs through a house kicking, punching, slashing and smashing furniture. A man does a flip off a stage and slides across a restaurant floor passing under tables. Several men hold guns to a man's head, a woman threatens two men with a gun, and a woman threatens a man with mace (or pepper spray). A woman has a bloody cut on her knee. We see writhing larvae and then watch them hatch with lots of slimy goo, and a deer lifts its tail and urinates into a stream; we follow the stream into a water bottling plant and through the purification process. There are discussions about a bacterium that causes dehydration, and about poisoning a water supply. When a man puts on a special suit for the first time, we see scanners flashing beams onto his skin and adjusting the suit to fit his body. The outtake reel has a few additional pratfalls: a man is hit in the head with a boom mike, a man misses a kick and lands on another man, etc. 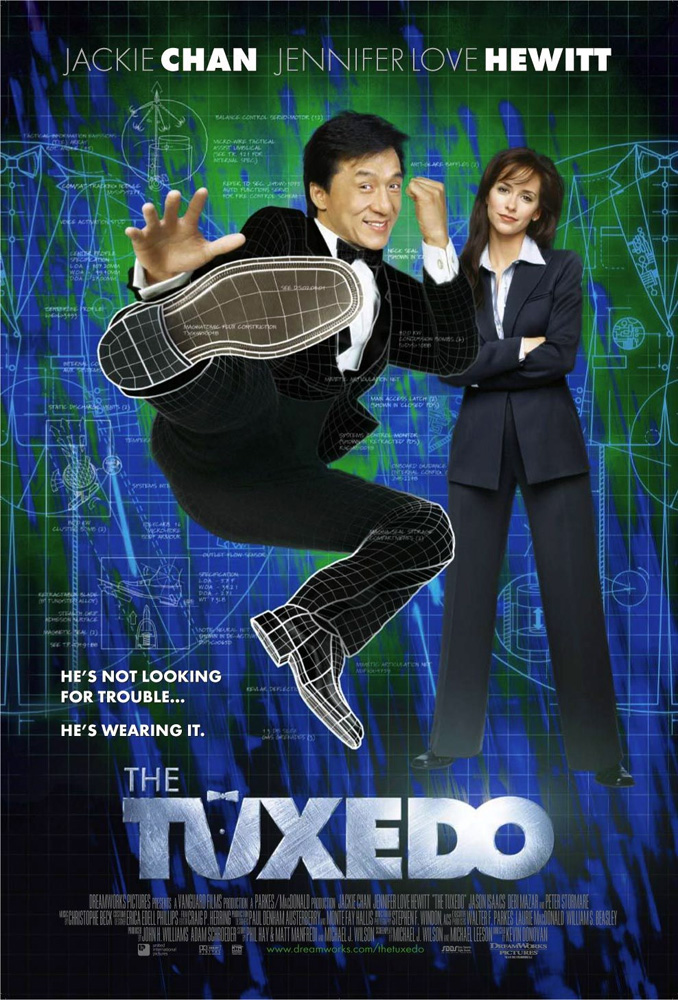