High school friends come together for their 10-year reunion and reminisce about their past and how much they've grown up -- and also grown apart. With Channing Tatum, Rosario Dawson, Chris Pratt, Justin Long, Ari Graynor, Oscar Isaac and Max Minghella. Directed by Jamie Linden. [1:40]

SEX/NUDITY 4 - We see a woman on top of a man in the backset of a car and sex is implied but not seen (we see the windows of the car steaming up).
► Two women dance suggestively with one another while rubbing their hands up and down each other's bodies. Two women dance suggestively with a third woman, and two men playfully join in, holding their hands as the women grind against one another. A man playfully slaps a woman's backside; he then dances suggestively with two women. A man jokingly slaps another man on the behind.
► A man sneaks into a women's restroom where he sees his girlfriend, wraps his arms around her and they kiss passionately. A man and a woman kiss passionately. A man and his girlfriend kiss, he kisses her neck and then grabs her and throws her on a bed as he tickles her. A husband and his wife kiss passionately. A man and a woman lean close as the woman tells the man that kissing is a bad idea and we see them kissing passionately moments later. A man kisses his girlfriend on the head on multiple occasions. A man kisses a woman on the forehead. A woman grabs a man, hugging him and then kissing him on the cheek; she then repeats the action with a second man. A woman kisses a man and grabs his face. A man kisses a woman on the cheek. Men and women hug and kiss on the cheek in greeting throughout the movie. A woman deflects a hug from two men.
► Two men wrap their arms around a woman's waist and shoulders for a photograph; one of the men rests his hands on the woman's stomach. A man grabs a woman's waist and hugs her for a picture. A man and a woman butt their foreheads against one another in a flirting gesture. We see a photograph of a teen boy and a teen girl with their arms around one another.
► We see photographs of two teen girls playfully grabbing one another's breasts; a man looks at the photos, then looks at a woman's breasts, and remarks, "they're not real." A man gets angry with another man when he tries to pick up a woman; the man shouts at the man, saying that he is already married.
► A woman jokes with her husband that she had always wanted to "sleep with a black guy" and the man makes a crude joke implying that sleeping with him will be the same. A man teases another man, saying that he cannot stop looking at a woman's breasts. A man jokingly tells another man that he is tired of having sex with the same person for the past three years. A man tells another man that he had told a woman that he was frequently sleeping with other people so that he looked like he was "in high demand." On multiple occasions, a man jokes with another man about having sex with a model, including telling a woman that the man is busy "sleeping with models," until the man then admits that he had only slept with one model. Two men joke about hitting on pregnant women for dates. A man asks another man if he would have had sex with a woman, despite being married and the man responds that he just wanted to know that he "could have." A woman jokingly asks a man if he is "touching himself" in front of her children after we see the man reach into his waistband to adjust a hidden flask; the man jokes that he is not touching himself "sexually." A man crudely jokes with a woman that he had gotten his first pubic hair on the day a photograph was taken.
► We see a photograph of a shirtless teen boy.


VIOLENCE/GORE 3 - A man in the back of a taxi slams his face into the clear divider when the driver suddenly slams on the brakes (the man is unharmed). A woman slaps her passed-out husband (he blacked out from drinking) repeatedly on the arm and face to wake him.
► A man tackles another man; the man is drunk and trying to be friendly but the other man is visibly upset. A man drunkenly tips over a large sign and he falls to the ground but is not injured. A drunken man almost pushes over a large stand-up frame and nearly hits a man and a woman standing behind the frame (no one is harmed).
► A woman interrupts a man, angrily pushing him aside as she climbs into a car. A man shouts at another man. A wife shouts at her husband. A woman shouts angrily at two men. A man apologizes profusely to several men on multiple occasions, saying that he had been cruel to them in high school.
► A woman tells her husband that her father had a heart attack when she was in high school, and that she missed her prom to visit him in the hospital with another teen boy. A woman tells another woman that her father had died. A man jokes with a woman that another woman will "kill him." A woman jokes with a man that his old high school looks like a "mental hospital." Two men and a woman, along with two children, listen to a song that includes flatulent sounds.
► A man playfully tackles and hugs another man, slapping him on the behind as they joke with each other about growing chubbier. Two men joke about covering a woman's house in toilet paper and we then see them throwing toilet paper rolls over a house and tree.

SUBSTANCE USE - We see four men smoking a marijuana joint in a car and two of them are seen puffing and exhaling, and a woman teases a man that he should not smoke too much marijuana because he is a "lightweight" and only needs "two puffs." Throughout the movie we see men and women drinking liquor and beer, a man is shown drinking frequently to the point of extreme drunkenness, a man pours a mixed drink that is mainly liquor with a small amount of soda, two men smuggle liquor into a party in baby bottles after proposing to a group of people that they smuggle liquor (despite being of age and there being an open bar provided), a man becomes progressively more inebriated and orders shots of liquor (we see him doing shots of liquor repeatedly), a man jokes that he is going to film people "getting wasted" at a party, and a woman tells a man that her mother is probably "getting wasted" somewhere and we later see the woman cleaning up a bottle of vodka (implying that her mother was a drunk). A man asks a woman if they can share a cigarette and he then turns down a cigarette when she offers, we see a woman smoke a cigarette as she tells a man that she had quit smoking previously, and a woman ask another woman if she would like to smoke a cigarette (she agrees, we do not see them smoking).

MESSAGE - Going to high school reunions can be a very enlightening experience. 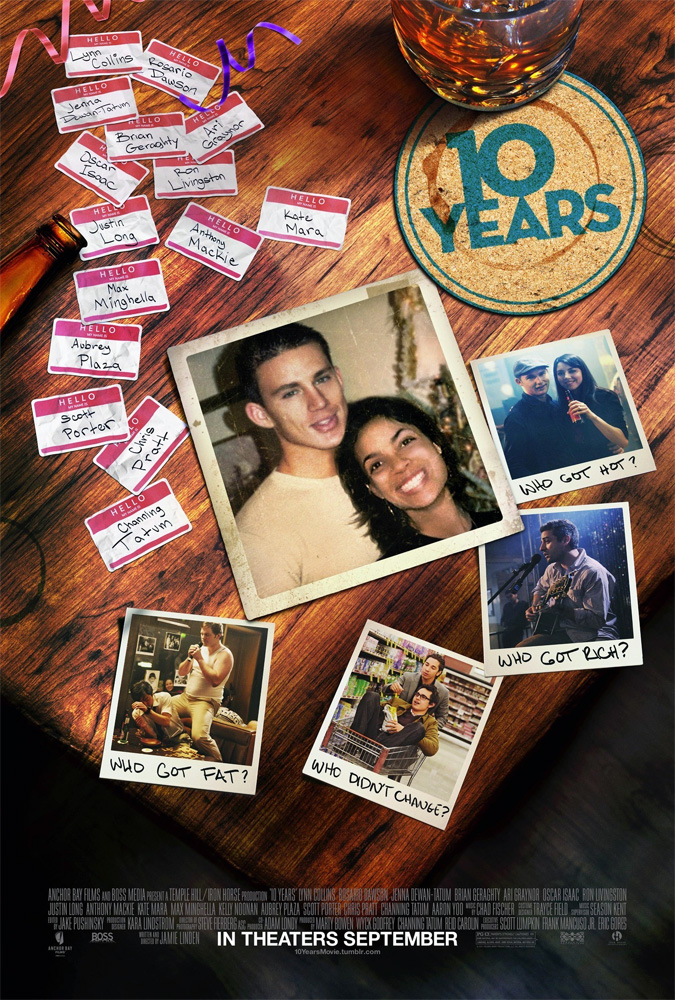