Sam Shepard stars as a commander whose elite naval flying team (Josh Lucas, Jessica Biel and Jamie Foxx) is assigned to test a new plane controlled by an advanced computer that uses artificial intelligence to learn from experience. When the plane is struck by lightning after their first mission, it begins to behave erratically and refuses to obey orders. Also with Richard Roxburgh and Joe Morton. Director Rob Cohen. [2:00]

VIOLENCE/GORE 5 - A pilot in a plane fires a rocket into a hangar door, it explodes, and the men and trucks on the other side of the door are thrown back through the air from the blast; the pilot fires again causing another part of the complex to explode.
► A wounded pilot stumbles toward a military camp, she is spotted and fired upon, she fires back, a dog charges toward her, there is a huge explosion behind her, and a tree line bursts into flames. A pilot is shot at, he shoots back causing a weapon to explode and the blast throws a man back into barbed wire. A plane flies into a helicopter causing them both to explode. A plane fires on a helicopter and it fires back.
► In an extended scene a pilot is forced to eject after she loses control of her plane, the plane explodes, debris showers down on her, and she delays opening her parachute; then she opens it, it is hit by the burning debris, catches fire, she hurls toward the ground, crashes into a canopy of trees and dangles from her harness, and she opens the latches and falls to the ground (we see blood on her face).
► Several soldiers are shot by a downed pilot, and others shoot back as she runs for cover. A man with a gun threatens others with guns, they lower their weapons, one man who is hiding opens fire, and several men are shot. A downed pilot being chased by armed soldiers is shot in the arm (we see blood spurt and the pilot falls to the ground and we later see her with a very bloody arm). A man shoots himself in the head (off-screen).
► Fuel that has been released into the air forms a circle around an airborne fueling dock, a plane approaches to refuel, another plane ignites the fuel, a huge circle of flame surrounds the first plane, and it is thrown back from the explosion. Many armed men get out of cars in a crowded marketplace, they go into a building, and a bomb is dropped into the building causing it to explode and reducing the building to rubble.
► Two men struggle over a hypodermic with serum in it, one man is injected and he flails on the floor and falls over dead. We see a man beating another man with a pipe, in silhouette.
► Armed soldiers search for a downed pilot using a dog. A downed pilot pulls a gun on a little girl who runs away screaming. Guns are fired into the air in celebration.
► Several planes fight mid-air while flying very fast through clouds: three planes are shot down, one is damaged on its wing and it begins to burn, and another drops a bomb in water that causes a water plume that then washes over the plane with the burning wing and puts out the flames. Planes fire on targets on the ground that are firing on them, one plane drops a bomb that ignites nuclear warheads and we see radioactive dust spread across a densely populated area. A plane chases another plane through mountainous terrain, one fires on the other, and one crashes into the side of a mountain. Planes fly very fast around and through mountainous terrain, one plane fires a rocket at a target on the ground causing a truck to explode, and the plane is fired on by men on the ground; another plane fires at another truck and a bunker (they both explode), then several trucks in a convoy explode and finally a rocket is fired into a cave and it explodes (this was all during a military testing mission).
► A pilot flies his plane straight up into the air, then back down to earth at a speed that could cause him to pass out; he pulls the plane up, then begins to lose consciousness but manages to fly clear of buildings. A pilot loses control of his plane, he lands on a runway going too fast, the landing gear breaks away, the nose cuts into the runway and the plane is eventually stopped (we see the pilot with a very bloody forehead and mouth). A plane tries to refuel at an airborne refueling dock, the dock refuses access, the plane fires on the dock and fuel is sprayed into the atmosphere. A plane is struck by lightning, loses control, it tries to land on an aircraft carrier's deck, and safety nets are deployed fearing it will crash. Planes speed through the sky at Mach 5. Many bombs are loaded onto planes.

MESSAGE - There should be some human element in any war or military action to keep a level of morality. 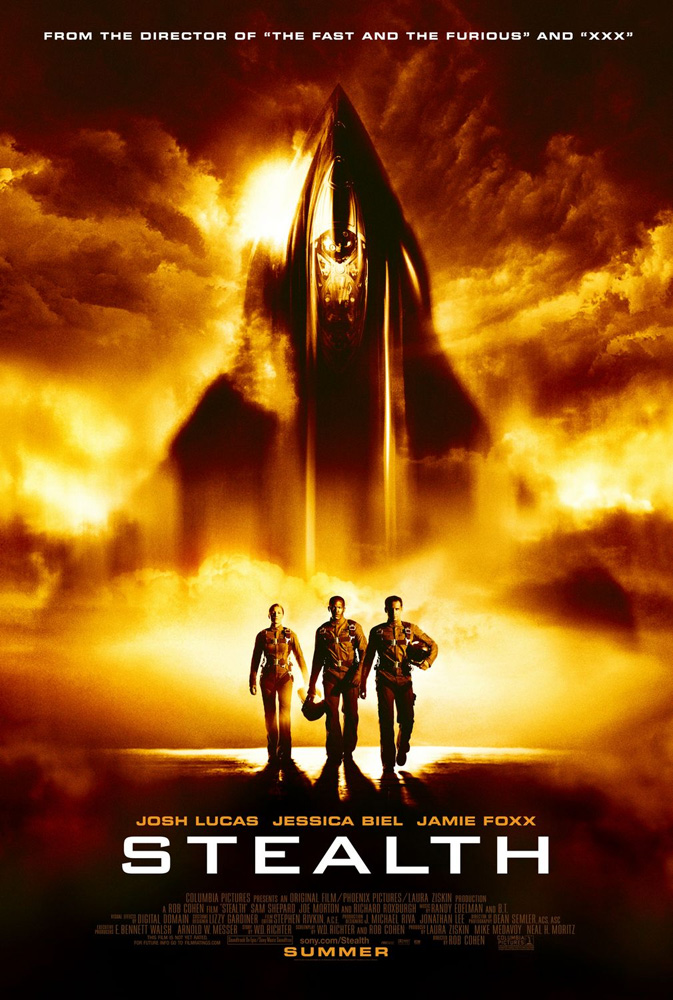