A prequel to "The Silence of the Lambs" -- filmed before in 1986 as "Manhunter": A former FBI agent (Edward Norton) who was nearly killed by Hannibal Lecter (Anthony Hopkins), has to seek the help of the incarcerated cannibal in order to catch a serial killer known by authorities as "The Tooth Fairy." Also with Ralph Fiennes, Philip Seymour Hoffman and Harvey Keitel. [2:05]

SEX/NUDITY 6 - A woman kisses a man and touches his crotch, then moves her head down below his waist and presumably performs oral sex; we see the man nude (bare back and buttocks) in bed in the morning suggesting that they had sex. A man runs through a house nude and we see his bare buttocks and a glimpse of his private parts. A man and a woman hug and kiss, and another man and a woman kiss romantically. A woman's clothes are torn open and her bare breasts are exposed. A man opens his robe and we see his bare buttocks. We see a sketch of a nude woman (her bare breast and hip are shown) spanking a nude baby (we see the baby's bare buttocks). A man removes his shirt and we see him bare-chested. Women wear outfits that reveal bare abdomens, cleavage and bare thighs (bikinis, shorts, and halter-tops). A man is glued to a chair while only in his shorts. There are references to finding semen at a crime scene. It is said that a murderer sexually molests his male victims and that he is impotent with women.

VIOLENCE/GORE 7 - A man grabs a man's face and bites a piece of his tongue or nose off (we hear the victim screaming in pain and the assailant is covered with blood and spits out a piece of flesh). A man in a wheelchair is engulfed in flames and rolls down a street. A man is stabbed in the stomach; he clings to his assailant who drags the knife upward and the victim falls to the floor (we see blood on his shirt and pants). A man is stabbed in the abdomen with two arrows, he stumbles backward, leans on a desk and is shot a few times in the chest and stomach (we see bloody bullet holes and blood oozes onto his shirt where the arrows entered). Two men are shot repeatedly, they both fall onto the floor and one is shot a few more times in the head and face. A man threatens a woman with a gun, then we hear a shot, the woman's face is sprayed with blood and we see a pile of bloody goo on the floor. A man is shot in the head and falls to the ground (we see a hole in his forehead). We hear that two families have been brutally murdered; a man describes what took place and we hear about a man's throat having been slashed, a woman having been shot in the stomach, two children having been shot while asleep, a woman having been raped, and of shards of mirror having been inserted in the victims' eye sockets. Two men fight throwing each other around, one is stabbed in the leg, and one is slashed across the chest. A man holds a knife to a boy's face and presses it into his flesh. A man is forced to look at a slide of murder victims in different stages; we see women startled, then murdered with bloody wounds, then with mirror shards implanted in their eye sockets. A man is knocked out when he walks to the door of a van and is grabbed by someone inside the van. A woman is knocked out by a man who holds a cloth over her face. A man hits a woman on the head, knocks her out, and runs toward another woman who screams. There are many discussions of crimes and crime victims including photographs of the victims at the scene of the crime (we see many bloody wounds and puddles of blood and splattered blood). We hear about victims having been bitten and we see photos of bite marks. A man makes a reference to a woman having gotten "extra attention" from her killer. A man talks about a killer taking pieces of his victims' bodies and using them in cooking. A house is set on fire, a woman struggles to get out (she's blind) and we see charred bones in a lab later. A woman is startled and frightened when she hears someone moving around in her house at night. A man threatens to staple another man's eyelids to his forehead. We hear that a dog had been wounded and was put to sleep, and a cat was killed (we see a hole in a yard from which the cat was exhumed). A man puts a gun in his mouth. A man lunges at another man a couple of times, and a man shoves a woman down onto a sofa and frightens her by talking about killing her and then himself. A grandmother talks abusively to his grandson and threatens to cut off his private parts, and a man threatens to cut off a boy's private parts. A house explodes sending debris all over a group of men gathered in a yard. A man has a large scar on his stomach; another man has a scar on his upper lip and an enormous tattoo. We see artwork by William Blake that depicts death and evil-looking creatures. We see a sketch of a woman spanking a baby (the baby is bent over the woman's knee and her hand is raised). A man eats a painting. We see a man tethered and chained walking around a circle in a gymnasium. A woman takes target practice with a gun. There is a discussion about a missing person. A woman strokes a sedated tiger and he purrs and moans. A boy urinates in his pants (we see a puddle on the floor).

MESSAGE - Live every day as if it is your last. Some people are just too deranged to be redeemed.

(Note: There is a line about why the killer will continue to kill and a man says, "because it makes him God.") 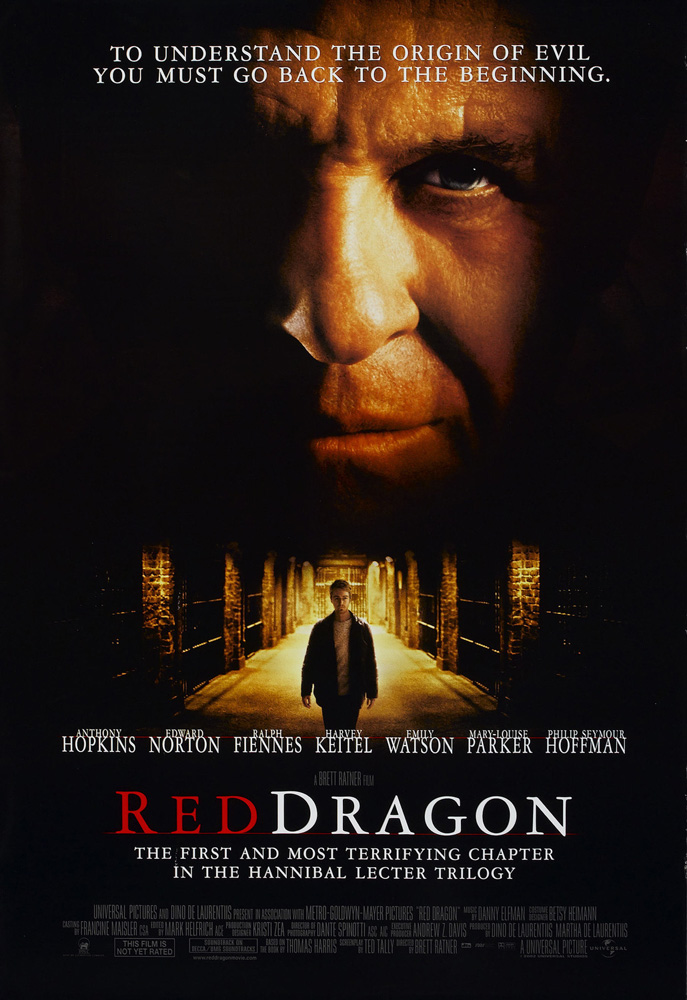