A man (Ben Foster) returns home from combat duty after sustaining injuries and has 20 months remaining on his tour. After recovering, he is assigned to the Casualty Notification Team where he and another officer (Woody Harrelson) are tasked with informing the relatives of soldiers who have been killed in action. Also with Samantha Morton, Jena Malone, Eamonn Walker and Steve Buscemi. Directed by Oren Moverman. [1:45]

SEX/NUDITY 8 - A man and a woman (who's engaged to another man) have sex: we see her nude from the back (her bare back and buttocks visible), she thrusts on top of the man and she moans, he then lies on top of her (we see her bare breasts) and he thrusts.
► We see a man's bare buttocks while he is dressing and a fully nude woman climbs out of his bed (her bare breasts, abdomen and pubic hair are visible) and dresses (it is not clear whether they have had sex or were going to have sex but were interrupted).
► A man and a woman kiss, she wraps her legs around his waist, we hear rhythmic moaning from another room, and another man and a woman overhear the moaning and seem uncomfortable.
► A man and a woman kiss in a couple of scenes. A man kisses a woman's hand. A man and a woman hold each other and dance slowly, they almost kiss a few times, and he kisses her on the cheek and forehead.
► A man wears boxer shorts and no shirt in a few scenes (we see his bare back, chest and legs). A woman wears a low-cut top that reveals cleavage in a few scenes.
► A man flirts with a woman in a bar and says, "I'd like to strap her on…" A man tells another man that "she's banging someone else" (they have just notified that her husband is dead). A man in a bar invites a woman to sit with him (they had been together the night before) and she lies that she's pregnant. A man asks another man if he needs to go home because of "Internet porn." A man says of another man, "He wants to get in my pants." A man talks about the sexual conquests of soldiers in various wars.

VIOLENCE/GORE 6 - Two men fight with three other men: we see a few punches being thrown and then see the two men with bruises and bloody contusions. A man shoves another man, pushes him against a pillar, slams his head against it and yells at him.
► Two men tell a woman that her son has died in combat, she screams and slaps one of the men in the face; another woman in the room screams and we hear them crying and screaming after the two men leave the house. After receiving news of his son's death a man spits in the face of the man who informed him, yells at him, throws a pair of gloves at his back and continues yelling. A woman screams inside her house after being told that her husband is dead (we hear it from outside). A teen girl is told that her husband is dead, she screams and her father yells because he is not aware that they married before the boy went to war.
► A man describes an attack where many men were fired upon, several were wounded, and that he pulled one man to safety not realizing that he put him on top of an IED, which exploded killing the man and shooting "flesh shrapnel." Two men talk about death and the proper way to inform the next of kin. A man describes that another man was shot numerous times and that you could see part of his lungs through a wound. A woman yells at two soldiers who are trying to recruit teen boys in a shopping mall and she tells the teens that she has just bought a suit for her dead husband, who died in combat, to wear for his funeral and that there is a sticker on his coffin that reads "Remains Un-Viewable." A man talks about contemplating suicide. A man describes how a soldier died and that his "platoon came under sniper fire and it was an instant death." A man refers to being on the "Angel of Death Squad." A man wakes up on the ground and asks, "Am I dead?" A man says that his father died in a drunk-driving accident and that his father was the drunk driver. A woman talks about her husband coming home from war a different man and that he was full of rage. A man says, "All I ever wanted was to get shot at."
► A man yells at another man about repairing a car. A man yells at a police officer after he is pulled over for a traffic violation and tells him that he is now going to be late in notifying a woman that her husband is dead.
► A man throws several darts into a board and the surrounding wall while yelling. A man punches a hole in a wall.
► We see a soldier's funeral and a woman flinches when guns are fired in the air as a salute. We hear a woman screaming from a neighboring apartment (it sounds like a fight).
► A man urinates on a tree (we hear trickle). A man vomits (we see goo) and falls to his knees after being told that his son is dead. A man has multiple tattoos on his arms, back and chest. We see a man in a hospital is putting eye drops in his eye (we see a close-up of the eye) and a scar just beneath the eye.
► Two men pretend to be in a firefight in a parking lot: one pretends to cut the other on the throat and he pretends to stab the first in the stomach. 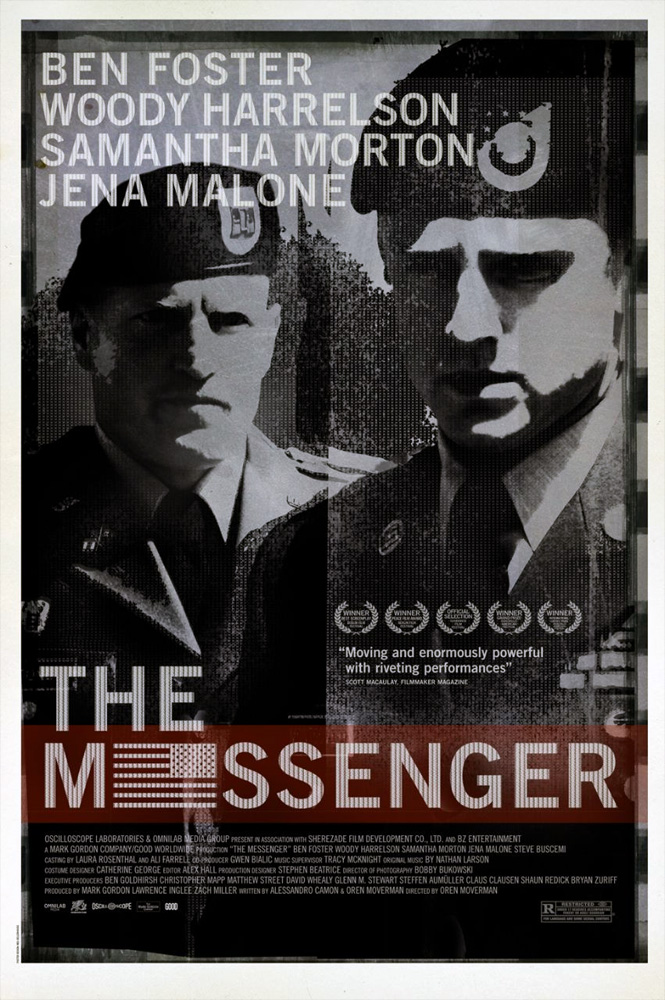