Vampire hunters James Woods and Daniel Baldwin must kill a master vampire before he finds a church relic that will allow him and his disciples to live in the sunlight. Also with Sheryl Lee, Thomas Ian Griffith, Maximilian Schell, Tim Guinee and Gregory Sierra. [1:47]

SEX/NUDITY 7 - Sexual innuendo (including references to oral sex). A few kisses. We see a vampire's head between a woman's legs and her face writhing in fear; later, we see two bloody teeth marks on her inner thigh and blood smeared on her legs. We see part of two women's bare buttocks, several bare-breasted women dancing and lots of scantily clad women (it's implied that they're prostitutes). We see the bare backside of a woman tied to a bed.

VIOLENCE/GORE 10 - In many scenes, vampires push, scratch or try to bite people; many are killed and we see lots of bloody wounds. A vampire breaks many people's necks (we hear crunching noises and see lots of blood pouring from one woman's neck). In two scenes and in a few pictures, we see lots of bloody corpses, puddles of blood and blood smeared on walls; in one of the scenes, a man pours gasoline on the corpses and sets them on fire. In many scenes, people shoot vampires repeatedly (we see lots of blood pouring out of the vampires' mouths and on their bodies and faces); in one scene, a vampire pulls a woman in front of him and she is shot several times (we see bloody bullet wounds on her chest). Lots of vampires are shot with harpoons and dragged out of buildings into the sunlight where they burst into flames (we see many vampires burning and lots of charred remains lying around buildings); one harpooned vampire grabs onto something and a man shoots its hand off (we see the bloody stump, then the bloody hand gripping a pole). We see several vampires being stabbed in the chest and head with stakes (we hear lots of squishy noises and see lots of blood pouring from the wounds). A vampire stabs a man in the stomach and slices upwards (we see blood splatter on the man's face and some blood on the vampire's hand); we then see the man's torso split in half, with blood spurting from it. A vampire pushes his hand through a man's torso (we see it sticking out of his back) and then slowly pulls his hand out (we hear squishy sounds and see lots of blood on the man's back and the vampire's hand). We see a man decapitate two corpses (we hear squishy noises and see veins and bloody flesh on the corpses' necks and heads), put the heads in a bag and bury them. A vampire decapitates a man; we see his head fall off and blood spurt from his neck, and we later see his head lying a few feet from his body. A vampire bites a man's neck; we see the very bloody wound and a hunk of bloody flesh hanging out of the vampire's mouth (blood is all over her mouth and shirt). A vampire points a gun under a man's chin; we hear a shot and then see gooey, bloody matter splatter on the ceiling. A man shoves a towel in another's mouth and then slices his hand with a knife (we hear the knife cutting his skin and see the bloody wound). A man with a bloody face is hung to a pole by his arms and he's later seen hanging on a cross; his leg is slashed with a knife and blood is squeezed out of the wound and given to a vampire to drink (we see blood dripping from the vampire's mouth afterwards). When a woman tries to jump from a ledge, a man pulls her back into the building through a window and he gets a bloody cut on his arm; the woman bites his wound and we see blood smeared on her mouth and face. A vampire holding onto a moving car is shot in the head and falls off into the road. A rolls down a hill. A building explodes. Twice, we see a man burn one of his bloody wounds with a lighter (he screams in pain). Some punches and kicks. A mummified body falls out of a closet.

MESSAGE - Good triumphs over evil -- just in the knick of time. 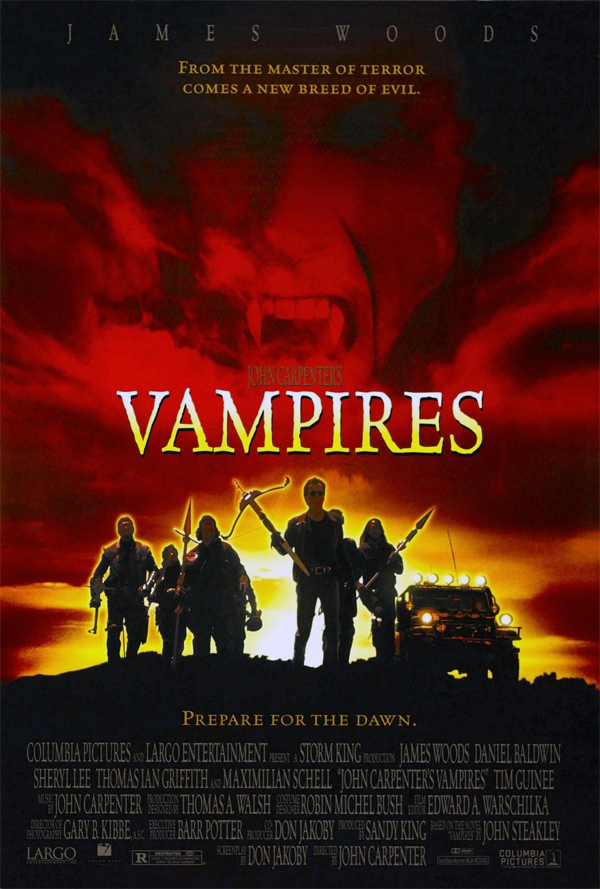