Jason Voorhees gets supercharged in the umpteenth installment of the series about the silent, goalie-masked serial slasher. He now gets to operate in space, in the year 2455. The Earth has died, and when a crew of earth-bound explorers finds a woman and a man cryogenically frozen, they bring them back to their spaceship. And the bloodletting begins anew as Jason finds new and original ways to murder more people. With Kane Hodder, Dylan Bierk, Lisa Ryder, Chuck Campbell and Barna Moricz. [1:33]

SEX/NUDITY 6 - A young man and woman kiss passionately, he removes her top, they lie back on a bed and he kisses her abdomen and she moans. A young woman with a bottle of booze and a pair of large forceps propositions a man; we see her later straddling him and pinching his nipple with the forceps as he lies in a sheer negligee yelling with pleasure. Young men and women kiss and caress each other in several scenes. A man and a female robot kiss passionately a few times. Two young women take off their tops, exposing their breasts, and invite a man to have "premarital sex." A topless female robot tries on a pair of nipples while standing in front of a man (the nipples slide off). A woman lies on a medical table and her clothes are removed; we see her in her bra and panties and watch as her panties are cut in preparation for removal. A bare-chested man lies on a medical table. The women wear tops that expose bare midriffs, shoulders and cleavage, and tight-fitting pants. There is some sexual innuendo and references to a man's endowment.

VIOLENCE/GORE 8 - A woman backs into a man who grabs her and holds a knife to her throat; we hear it slicing and see her with a gaping, bloody neck wound, and hear her gurgling. A woman is sucked through a grate and out to space (we see bloody tissue dangling from the grate). We see a man who has been cut in half at the waist drag himself across a floor leaving a trail of blood. A man is shot repeatedly, to the point where his arm is shot off, his leg is shot off, a hole is blown through his side and part of his head is shot off. A frozen man holding a machete tips over and cuts the arm off a man standing in front of him (we see the bloody stump and later see the man carrying his dismembered arm). A man is thrown over a railing and is impaled on a large drill bit; he spins around before he comes to a stop and we see the bit covered with blood, and blood trickles from the man's mouth. Blood splatters on a control console and we later see bloody body parts and what looks like intestines and other bits of organ. A man grabs a woman from behind, shoves her face into a sink of liquid nitrogen and then slams her into a counter shattering her face and part of her head into bloody shards of ice. A hand slams through a metal door, grabs a man by the throat and he is stabbed twice through the abdomen (we see the blood covered weapons). A young man opens a door and is stabbed in the abdomen (we see the blade go completely through his body) and blood splatters on a young woman who is sitting nearby. A female robot is stabbed through the chest. A man's head is slammed into a wall a couple of times and we hear it crush. A man's back is snapped over another man's knee, and we hear a man's neck popping as it is twisted and breaks. A woman swings from a metal claw through the abdomen, and a woman is stabbed in the abdomen. A man is shot repeatedly and falls back onto a large metal claw that is hoisted into the air (we see part of the claw protruding through his abdomen). A man is shot repeatedly and backs into a "cryostatis" vault where he is frozen. A woman is exposed to cryogenic gas, gasps and goes still with frost on her face. A man is held by the face, shoved against a control panel and he is electrocuted and screams. A woman digs into the eye socket of a man with a medical instrument and pulls out a slimy, dripping gob of something (we hear lots of squishy noises). A woman cuts around a mask with a scalpel (with lots of blood oozing and squishy sounds) that appears to be attached to a man's face and when she lifts it up we see strands of slime and deformed, decomposed flesh. A robot's head is knocked off and several people are shoved around. A man takes an ear piece off a severed head and another man holds a severed head by the hair. We see a close-up of an eyeball and see a hand with a hypodermic needle reflected in it a couple of times, and we see twisted, discolored flesh around a mask. A man is cut in half (from head to waist) and another's head is lopped off in a computer simulation. A man attacks several men killing them all; one man dangles from chains wrapped around his neck (he has bloody streaks on his face), another man is stabbed through the back with a blade, and a few other men are beaten with chains. A woman has a bloody wound on her abdomen. A space ship explodes and two characters are hurled through space and burn up as they hit a planet's atmosphere. We hear people screaming in a few scenes as they are apparently being killed. Two women in sleeping bags (in a computer simulation) are swung into each other and a tree by a man. There are a few scenes that show a cell regeneration process and part of it looks like streams of quicksilver (they are referred to as "ants") covering the injured area. A man carries a robot's disembodied head around in a few scenes. Two men fight alien creatures (shooting them with huge guns) in a simulation. A space craft crashes into a space dock and causes a huge explosion, a woman crashes a shuttle into a spaceship causing an explosion, and an explosive charge is set off in the part of a space ship where a man lies injured. A man crashes through a large glass window.

SUBSTANCE USE - A couple of young women are shown drinking beer and smoke marijuana.

MESSAGE - Greed will get you nothing but killed. 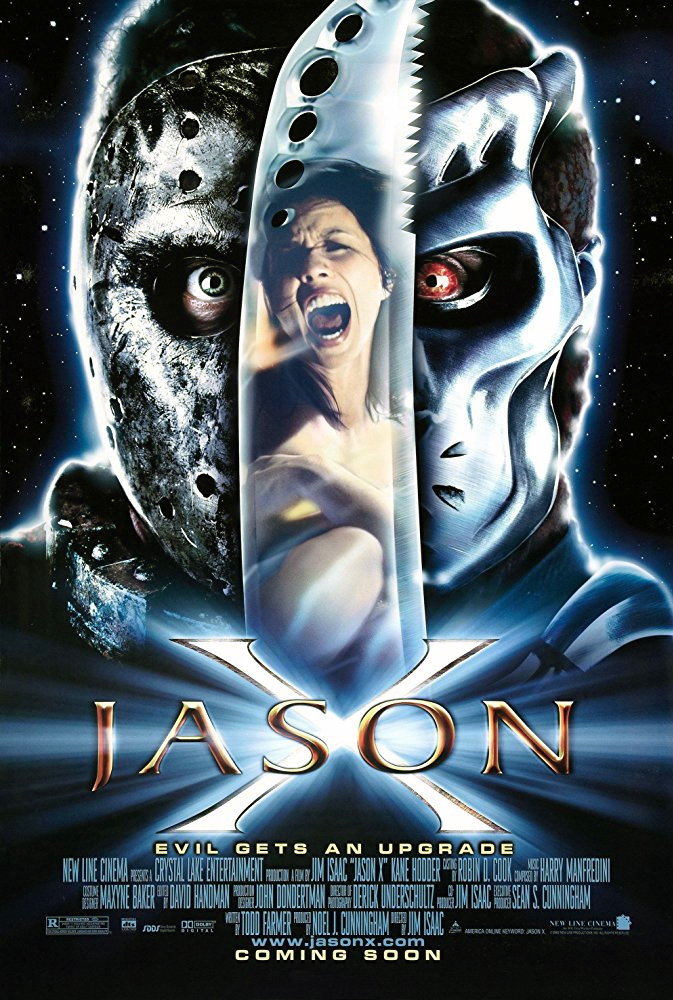