A doctor (Dieter Laser), living in an isolated area in the German countryside maintains a lab where he conducts experiments of forcibly conjoining human beings. Also with Ashley C. Williams, Ashlynn Yennie and Akihiro Kitamura. Directed by Tom Six. Some in German and Japanese with English subtitles. [1:28]

SEX/NUDITY 6 - Two women and a man spend much of the film with no shirts on (bare breasts and the man's bare chest are visible on numerous occasions) and only bandages wrapped around them, below the waist.
► A woman wears a low-cut top and shorts that reveal cleavage and bare thighs. A man swims in the nude and his back, buttocks and legs are seen. When a man lowers his pants to defecate, we see a brief glimpse of his bare buttock. We see a painting of a nude woman with a bare breast, bare abdomen, hip, buttock and leg.
► A man in a car speaks to two stranded women in another car and makes several sexual remarks, including insinuating that he had seen them in a pornographic video, and he makes a sexual gesture with his tongue.
► A man asks another man, "Do you get off on this?" A man talks about having spiked the drinks of two women with Rufinol and calls it the "date rape drug."

VIOLENCE/GORE 9 - Several scenes involve a man and two women who have been surgically conjoined, mouth to anus: we see the man and the women, unconscious, on surgical tables, a man marks them for surgical cuts, we see him cutting into buttock tissue (we see bloody tissue being pulled away) and he pulls several teeth using surgical pliers (we see the bloody teeth and a bit of blood in a woman's mouth); in another scene the conjoined man cries and says that he has to defecate and we see the conjoined woman attached to his anus cringe and gag as she is forced to swallow his waste; the three conjoined people climb a flight of stairs and as they go blood from where they are surgically attached pools on the floor; a man whips them with a leather horsewhip and we hear them screaming (we see lash marks on their backs later); while lying on the floor bandages on their knees are blood tinged; and we see them locked in a large cage as they yell and whimper.
► A man cuts his own throat using a shard of glass (we hear tearing and crunching and blood pours from the wound): he collapses, we hear him gurgling and see a pool of blood collecting under him.
► A man stabs another man in the foot and the knee using a scalpel (we see blood) and when the man falls to the floor, the other man bites him on the neck and pulls out a piece of tissue (we see blood on the victim's neck and the other man's mouth).
► A man is shot twice in the abdomen (we see bloody wounds) and he falls into a pool. We hear a gunshot and see a dead man floating in blood-tinged water. A man is shot in the head (we see bloody bullet hole and blood splatter on the wall behind him).
► A man kicks another man in the face twice (we see his bloody mouth) and he falls unconscious. A man bites another man on the leg (we see a bloody mark). A woman frees herself from her bonds and pulls an IV out of her arm (we hear a rip and see blood covering her arm and clothing).
► A woman's surgical scar is infected, a man squeezes a spot, puss oozes out onto his finger, he smells it and tells her she is very sick and will die. We see many photos and paintings of conjoined human infants and animals. Two women have large scars on their cheeks with surgical staples holding them together. A man buries the body of a man wrapped in a plastic sheet.
► A man injects another man's IV with a drug that kills him (we see the man writhe, we hear him moan, he then goes still and we hear his heart monitor with a steady tone). A woman breathes deeply, then takes her last breath and dies (he skin is gray-tinged).
► A man grabs a woman by the hair and injects her in the back of the neck with a drug that causes her to lose consciousness. A man injects the IVs of a man and a woman with a drug that puts them to sleep (they moan and thrash and scream before falling to sleep). Two women and a man wake up tied at the wrists and ankles to hospital beds (the man also has a bit in his mouth) and they scream and struggle to get free.
► A woman is shot in the back with a tranquilizer dart (we hear the bang, she flinches and falls to the ground whimpering). A man carries an unconscious man with a tranquilizer dart sticking out of his back into a house.
► A man goes into a wooded area to go to the bathroom, he lowers his pants and squats down, another man with a rifle approaches from behind him and we hear a gunshot (we do not see the man shot, but we see him unconscious and strapped into a hospital bed later). A woman drags an unconscious woman through broken glass (we see no ill effects).
► A woman falls into a swimming pool, a man with a gun stands outside aiming the gun at her, she goes under water to avoid being shot, the man closes the pool cover over her, and she gets out unharmed. A man holding a scalpel and a man holding a shard of glass threaten each other.
► A man pounds on a door and a plate glass window trying to get to a woman who is hiding, the glass shatters and the man enters the room with a rifle. A man knocks a drinking glass out of another man's hand and the man becomes enraged.
► A man licks blood off a floor. After having been drugged, a man vomits (we hear him gag, we see goo and hear a splat on the floor. After having been drugged a woman collapses and spits out a bit of goo.
► Two women drive along a dark road, one of their tires blows out, they walk through thick woods looking for help, and they are frightened and they argue. A man locks a door behind two women and he behaves in a sinister manner.
► A man describes and shows line drawings of a surgical procedure that will connect three human beings by attaching them at the mouth and anus. A man tells another man "I have to kill you," before doing so. A man threatens to sever the vocal cords of three people. A man asks another man if he thinks he is God and later if he is God.
► A man sits slumped in a car (we see him twitch a bit) and we see that he is looking at photos of dogs (we understand that he is grieving their death). Police officers with guns drawn search a house. Police question a man about missing people.

SUBSTANCE USE - A man puts a drug in several glasses of water and several people drink, a man grabs a woman by the hair and injects her in the back of the neck with a drug that causes her to lose consciousness, and a man talks about having spiked the drinks of two women with Rufinol and calls it the "date rape drug." A man drinks a glass of alcohol. A man smokes a cigarette in a couple of scenes.

MESSAGE - The depths of human depravity depicted in contemporary horror movies can surprise. 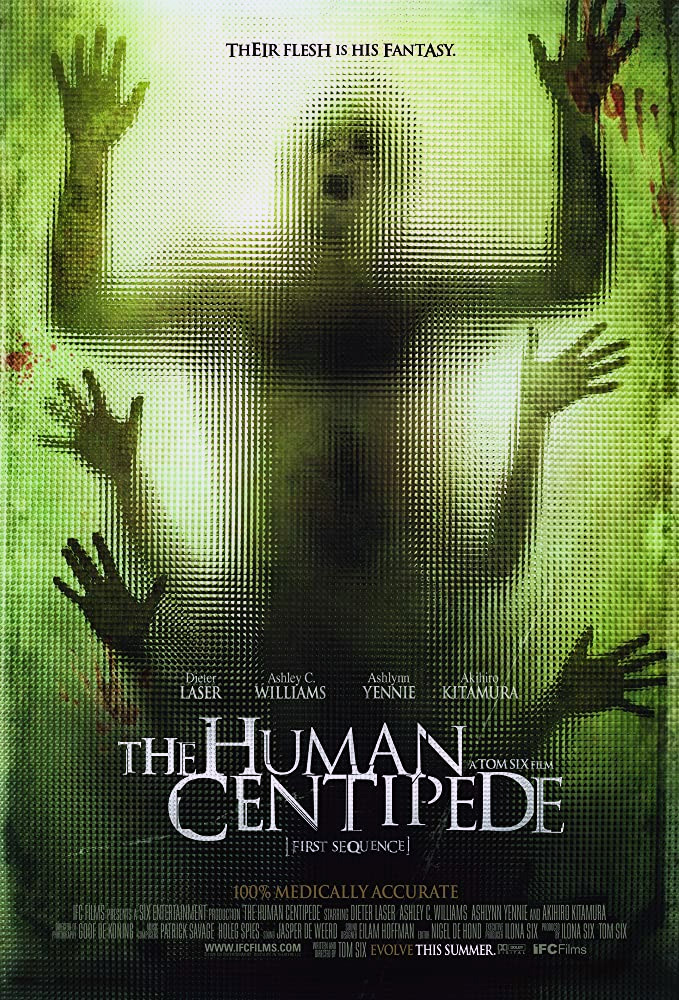