A divorced and lonely man (Joaquin Phoenix) works as a professional writer of love letters for other people, but remains isolated in his personal life. When he purchases a new computer operating system he finds that its Artificial Intelligence voice (Scarlett Johansson) seems very human and he falls in love with her. Also with Amy Adams, Rooney Mara, Chris Pratt and Olivia Wilde. Directed by Spike Jones. [2:00]

VIOLENCE/GORE 4 - A woman on a phone sex line (please see the Sex/Nudity category for more details) asks a man to talk about an imaginary dead cat; while she is in moaning sexually, he says he is picking up the dead cat and strangling her with its tail, upon which she shouts, cries in climax and hangs up.
► A virtual video game fills an entire living room; the man playing the game with a spaceman avatar encounters a doughboy-type cartoon character that berates him and tells him a dozen times "[F-word deleted] you."
► A crowded street scene shows hundreds of people rushing through Los Angeles, wearing earplugs that connect them to their own personal AIs; some of these men and women laugh, others shout in anger and all of them use exaggerated hand gestures and nearly hit one another occasionally; one man, unable to connect to his own AI, runs through the crowd, falls on the sidewalk, gets up and runs down into a subway entrance where he sits on a step and finally connects with his AI; we hear him arguing loudly with her and he becomes angry when he learns that she is the same AI on the computers of over 8,300 other people and he looks heartbroken when she refuses to agree to stop talking to the others. A computer AI shouts and cries at a man for not calling her enough; they argue briefly and he promises to call more often. A man, a woman and a female AI voice argue after an unsuccessful sexual event among the three and the woman leaves tearfully in a taxi; the man and the AI continue to argue for some time.
► A giant outdoor TV screen shows a large owl descending toward the audience with its talons outstretched; it seems about to snatch a man sitting on a short wall in front of the screen, until the man rises and walks away.
► A man stands in a pine forest during a snowstorm, looking sad and he cries briefly with tears running down his cheeks. A man and a woman, both looking sad, walk up a fire escape stairway in a high-rise apartment building and sit on the roof, watching the sunrise.

SUBSTANCE USE - A man drinks from a bottle of beer in his kitchen, a man and a woman drink from tall cocktail glasses at their restaurant dinner table and each one says in turn that "I'm a little drunk" as the woman giggles, a man pours himself a drink from a bottle of clear alcohol and drinks it with dinner, and two glasses of wine sit on a table at a restaurant (no one drinks). A woman complains to a waitress that her ex-husband wanted to put her on Prozac and the waitress seems embarrassed and walks away. Many people seem to have a sort of technology addiction and are shown constantly wearing wireless earplugs and talking to their computer systems.

MESSAGE - Computer technology can be both isolating and help us learn to create better human relationships. 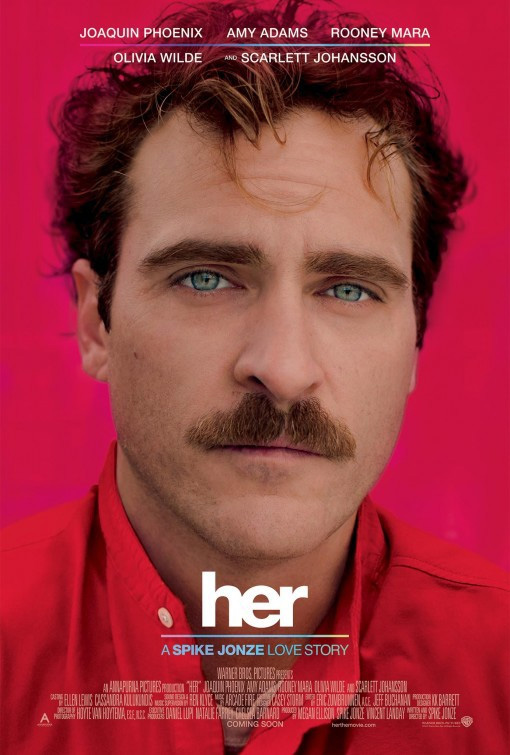