A legendary, aging Coast Guard rescue swimmer (Kevin Costner) is injured, both physically and emotionally during a rescue -- his crew, including his partner and best friend, were all killed -- and he becomes an instructor at a training facility. His teaching methods are unorthodox and rankle a young, brash swim champ (Ashton Kutcher). Also with Neal McDonough, Melissa Sagemiller and Clancy Brown. Directed by Andrew Davis. [2:16]

SEX/NUDITY 5 - A man lies on a bed (we see his bare shoulders and chest), a woman sits on the floor in a robe, she gets under the covers while kissing the man, they pull the covers up and we hear giggling and remarks about the "breaststroke" and the "butterfly" (it is implied that they have sex).
► A man sleeps in bed (we see his bare shoulders) and a woman (she's fully clothed) kisses him and wakes him up (it is implied that they have had sex).
► A couple of men take off their shirts while changing in a locker room and we see their bare chests. Women wear low-cut dresses that reveal cleavage and bare shoulders.
► A man and woman hug and kiss in a few scenes. A man and woman dance together in a bar.
► A woman makes a remark to a man about not wanting to be considered a score with "the local talent." A man bets his friends that he can talk to a woman and leave the bar with her in one minute.

VIOLENCE/GORE 6 - A ship sinks in very rough water: the crew abandons ship and we see bodies floating in the water, and a rescue swimmer jumps into the water from a helicopter, but the helicopter is struck by a large storage crate, it spins out of control, crashes into the water and explodes; one member of the crew surfaces with a bloody face wound, and one rescued member is pulled under water in the rescue basket when the helicopter sinks.
► A rescue swimmer is lowered by a cable toward a ship, he tries to grab onto the rigging and is tossed around, climbs down a rope and below deck to free a man who is trapped, and they are pulled up by a cable as the ship sinks; when the cable begins to fray one man falls, the other catches him, but his glove loosens and the man falls more than 80 feet into the sea and does not surface.
► A ship lists in rough water, three men on deck are loaded onto the rescue basket and pulled into the helicopter while another is trapped below deck (his leg is pinned); a rescue swimmer frees him, the boat lists, one man is struck hard by a tank and killed, and the passage door closes and traps the other and the ship begins to sink.
► Two kayakers are trapped inside a cave, two rescue swimmers jump from a helicopter and swim into the cave, an injured kayaker is loaded onto the rescue basket, but as the other starts to come out of the cave he panics, swims back inside and runs into a log knocking his head and falling unconscious; he is then pulled out and loaded onto the rescue basket (we see a bloody gash on his head).
► A man and a woman float in very rough water after their ship apparently capsized, and a coast guard swimmer takes the woman to the helicopter retrieval basket, while the man comes behind them and tries to pull the wife off the basket; the swimmer punches the man in the nose (we see a bit of blood), and the woman is struck hard by a large wave and we see her sink under water, but she is retrieved, CPR is performed on her and she is revived.
► We see footage of people in flames on a burning, sinking ship.
► An instructor pulls a man under water and holds him there; the man struggles to get free, he panics, the instructor grabs him again and pulls him under, and the man continues to panic and flail (the exercise then ends). The instructor does the same thing in another scene and before he can take the man under again the man strikes the instructor in the face with his elbow (we see his bloody mouth).
► A man has a nightmare about being pulled under water when he is caught in fishing nets. A man has a nightmare about seeing his partner injured during a rescue and ultimately dying. A man has flashbacks about the helicopter crash that killed his best friend.
► A man pounds another man's head on a bar three times and knocks him unconscious. A man grabs another man around the neck from behind, they twist around, the man gets free and pins the other man against metal bars with his arm twisted behind his back. Two men end up in jail with bruised and bloody faces after a bar fight -- one of them was thrown over a table and had a beer poured over his head.
► Rescue swimmer trainees are pushed to their physical limits in several scenes: Forced to stay in ice cold water to suffer hypothermia conditions, they are dropped by helicopter far out to sea and left there (they swim back through rough water), etc. Rescue swimmer trainees are punished by being forced to tread water while holding a stretcher filled with bricks over their heads. Rescue swimmer trainees are ordered to tread water for 1 hour, and one swimmer's leg cramps up and he pulls another swimmer under in a panic. A rescue swimmer trainee panics, surfaces and leaves his partner behind in the water; the other man sits on the bottom of the pool and waits for a long time until someone notices that he has not returned (he is fine).
► We hear about a car crash that killed three young men and only one walked away alive. A man talks about the rescue missions that were performed after hurricane Katrina struck New Orleans. We see a funeral service and people grieving.
► A man vomits from over exertion.

MESSAGE - There is no greater calling than saving lives. 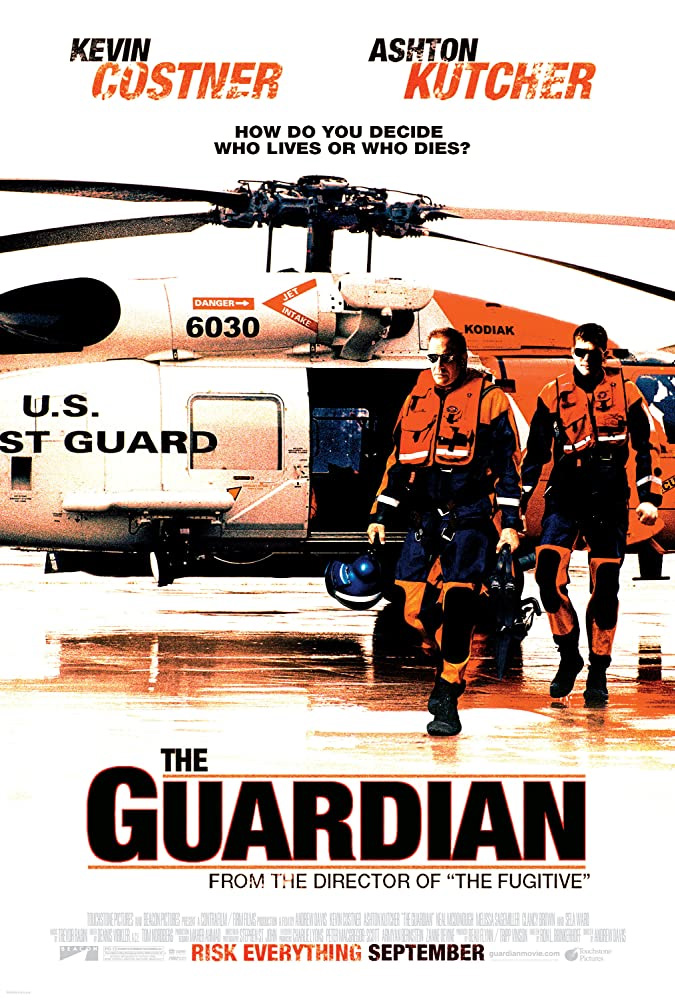