When a group of childhood friends (Adam Sandler, Kevin James, Chris Rock, David Spade and Rob Schneider) get together to attend the funeral of their high school basketball coach, they spend their first weekend together in over 30 years and learn how everyone has changed -- or perhaps stayed juvenile. Also with Salma Hayek and Maya Rudolph. Directed by Dennis Dugan. [1:42]

SEX/NUDITY 6 - A man stumbles out of a closet with a breast pump attached to his partially bare chest; he tells a group of people that he had a vivid dream about sex, and a dog then walks out of the closet, implying the man had sex with the dog unwittingly.
► Two men watch the silhouette of an older woman and a man, and it is implied that they are about to have sex. A man and a woman overhear implied sex sounds from a man and an older woman. It is implied a man and a woman had sex, as we see a woman's bare leg on a bed next to a man.
► Men and women kiss, and a man rubs an older woman's shoulders and kisses her feet. A man straddles an older woman and kisses her, and a man and an older woman kiss passionately (we see their tongues as they kiss). A girl and a boy are seen holding hands.
► After a woman grabs her breasts in her hands, a man implies that he is interested in having sex with her. A man asks another man if he likes to be "fingered" and then appears to put his finger in the man's buttocks (the man is fully clothed). A man rubs the breast of a woman after asking her if he could rub her pregnant stomach; the woman makes a disgusted face.
► A woman wearing a bikini dances suggestively around an umbrella as a man watches. Men ogle a young woman as she wears tight-fitting short shorts and continually bends over. Men look at a young woman and make crude sexual remarks about her appearance. Pre-teen boys are seen ogling a young woman on multiple occasions.
► A woman is seen breastfeeding a four-year-old boy on multiple occasions -- her bare breast is not fully visible, obscured by the child's head or a breast pump. While pumping breast milk to feed a bird, a woman "sprays" breast milk on the face of another woman, who licks it off her lips and remarks about the taste.
► A portion of a man's bare buttocks is seen as he walks away remarking that he does not wear pants (he is wearing a long shirt which obscures all but the lower half of his buttocks). A portion of a man's bare buttocks is seen when his swim trunks are pulled up too far. A man's bare chest is visible as women ogle his body, remarking on his short, tight-fitting shorts, using crude nicknames. Women wear cleavage-exposing dresses, and two young women are seen wearing cleavage and torso-exposing tube-top style shirts. At a water park women are seen wearing bikinis, a woman's buttocks are visible in thong-style bikini bottoms, and men's bare chests are seen. It is implied that a group of women see a man's genitals as he urinates.
► Men discuss having sex with women on multiple occasions, including a man giving vague details about "shaking the bed," with him on top of a woman. A man makes a crude joke about a man's wife "being into chicks." Men discuss having intercourse with a pregnant woman and their genitals injuring the unborn baby. An older woman remarks that she will use scarves to "tie up" a man, implying sex. A man and an older woman make multiple sexually suggestive comments. A man makes a crude remark about the appearance of a man's genitals.

VIOLENCE/GORE 4 - A man shoots an arrow into the air above a group of men, the men run, two of the men trip and fall (one's face lands in a puddle of mud), one runs into a tree branch and falls to the ground, and the arrow lands on one of the men's feet; the man passes out and when he comes to, we see the arrow (and a small amount of blood) sticking all the way through his foot and the injured man is later seen with his foot wrapped, but otherwise okay.
► A man shoots an arrow into the sky above a large crowd of people, the people run, an elderly woman is seen tripping and falling face-first into a cake and the arrow lands on the foot of a man who yelps in pain.
► A man on a zip line slams into a building and is later seen in a full-body cast. A man kicks another man in the groin twice, they both appear to be in great pain and the man doing the kicking is shown with his foot wrapped in bandages.
► A man swings on a rope swing, he slams into a tree trunk, he falls off and rolls down a hill, we hear a crack and the man shouts (we later see he is unharmed); we see a smashed bird and the man admits to falling on top of the bird (it is later seen having recovered fully).
► A man breaks an aboveground pool: the wave of water sends him and a young girl and young boy floating through a yard and when he attempts to regain his footing he slips and falls.
► A man grabs a hot rock, shouts and drops it on the bare back of a woman, who yelps in pain. A woman hits a boy in the stomach with a rock, and the boy reassures the woman that he is unharmed. A woman shoves a boy to the ground. A boy slams his body against another boy during a game. A man slaps another man with a piece of fruit multiple times. A young girl drives a car into an empty picnic table; she is unharmed.
► Two boys play a violent video game (we see characters being shot in the face, blood flying on the screen, we hear people screaming and a person is thrown over a deck of a ship). Kids are overheard playing a video game were shots are heard and someone shouts, "There is blood everywhere!"
► A boy flies through the air and lands in a lake after jumping off an air mattress. A man is hit in the head with a basketball. A woman has a drink knocked out of her hand by a basketball and she shouts.
► A man mimics vomiting noises and uses hand gestures to imply he is vomiting. A man urinates in front of a group of men who discuss the event (the stream of urine is visible, as well as the sound of urine hitting water), he turns and the stream of urine is seen hitting another man in the shoulder (he shouts in disgust). It is implied that a group of men urinate in a public pool when a cloud of dark blue appears around them and a child screams that they are urinating. Two men carry another man who has passed out from drinking, one of the men drops him on the ground, the other man instructs the man that it is okay to "go peepee" and the intoxicated man says, "I'm making peepee" (we do not hear sounds of urination or see anything). A woman flatulates loudly on multiple occasions.
► After throwing a cremated person's ashes on the ground, a man sticks his ash-covered hand into a bucket of chicken. A girl shouts, throws a piece of cake on the ground and storms away.
► A woman shouts at a man. A man shouts at a person on the telephone. A girl remarks that seeing a rope swing makes her think of hanging herself. Men discuss how their fathers would have "backhanded" or "thrown them down the stairs." A man jokes to a group of children that he used to throw bottle rockets at people's faces, hoping they would explode and injure them. A man jokes that he told a child that babies come from feces and that the child then looked in the toilet for a baby brother. A man says that a piece of food looks like a scab or a piece cut from an elephant's leg. 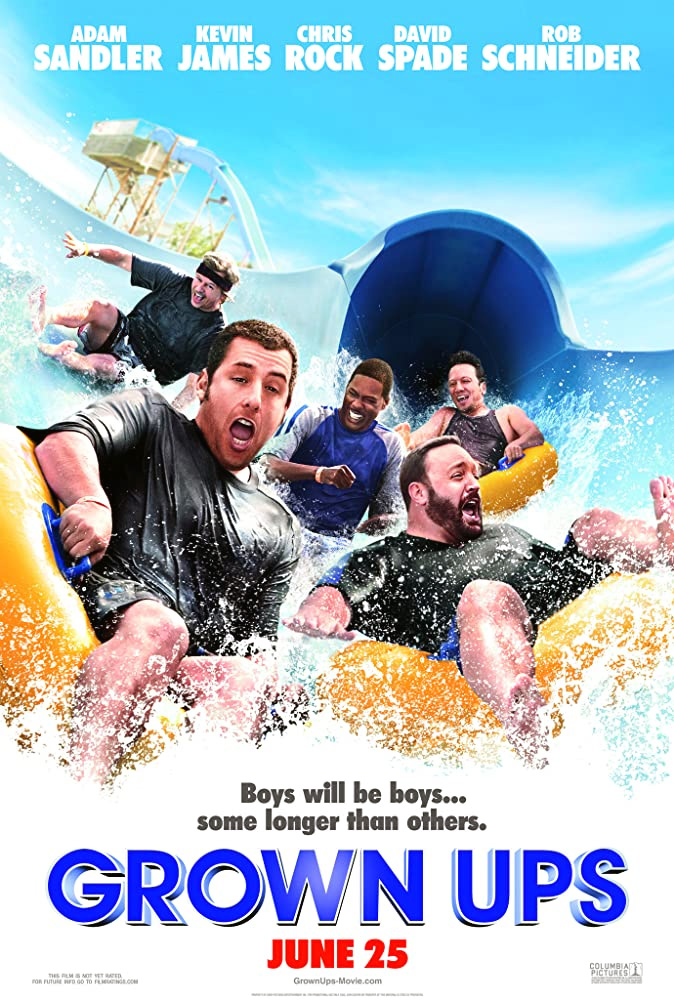