A multimillionaire tries his hand at producing reality TV by selecting 10 hardened criminals who are awaiting death in prisons around the world, and placing them on an unidentified island, allowing them to kill each other while broadcasting the action over the internet. The last one standing will be allowed to go free. With Steve Austin, Vinnie Jones, Trent Sullivan, Rick Hoffman and Nathan Jones. Directed by Scott Wiper. [1:40]

SEX/NUDITY 5 - During an attack on a woman, a man caresses her breasts, and it is implied that he rapes her (she screams but we don't see anything else). While fighting a woman, a man knocks her down and caresses her breasts and tries to unfasten her pants.
► A husband and wife kiss tenderly, they lie back on the ground and continue to kiss (they are then interrupted).
► A woman wears a low cut tank top that reveals cleavage. Several men are shown bare-chested in prison sequences.
► A man asks, "How do I look?" and a woman says, "I'd do you." A man tells a woman to take off her top, and so be more attractive to look at. A man describes a woman as a "hot African chick with a nice rack."

VIOLENCE/GORE 8 - A man attacks a woman, he touches her breasts (they are partially exposed from a low-cut top), she punches him in the face, he becomes enraged and begins punching and kicking her mercilessly; she pleads for him to stop (her husband, chained to a nearby tree hears her screams), he pulls a knife, she screams again, and it is implied that the man rapes her -- the man walks away and then an explosive device attached to the woman's ankle explodes.
► A man is beaten by two men who punch and kick him, break his arm and leg, continue to punch and kick him, and then one shoots him in the chest with an arrow; they then set him on fire (we see him in flames).
► A man holds a gun on several people who plead with him, he yells and threatens them and then begins to shoot them one at a time (blood splatters and spurts and we see streaks of blood on the walls).
► A man is punched in the stomach, shoved to the ground and his throat is slashed (we hear the slash and squishing). A man slits a man's throat, stabs another man in the stomach and strikes another man in the head with a gun.
► A man is shoved out of a helicopter and is impaled on a sharp post (we hear a crunch and see blood on the wound and in his mouth). A woman is shot through the back by an arrow, she trips an explosive device attached to her ankle and blows up (we see the blast and flames).
► A man attacks a woman, he punches her repeatedly, pushes her face into water, she tries to run, he grabs and straddles her, he caresses her breasts and tries to unfasten her pants; she then knees him in the crotch, head-butts him, stabs him in the neck with a piece of a tree limb, and trips an explosive attached to his ankle which explodes killing him (we see the blast and flames).
► A man is shot several times until he is dead. A man shoots a man three times through the chest and blood spurts out his back. A man shoots and kills two men (one is unarmed). A man is shot at and struck in the arm (we see blood on his arm); he runs into water and swims away while the gunman continues to shoot.
► Two men fight: they punch and kick each other, they use wrestling throws and holds (we see them with bloody face wounds), one is struck on the head with a rock, and he falls off a cliff and the explosive device attached to his ankle blows him up (we see the blast and flames).
► Two men fight: one punches and kicks the other, one swings knives at the other, and one is stabbed in the stomach and falls to the ground dead (we see the body with a bloody knife sticking on its abdomen).
► Two men fight: one is cut on the arm by a knife and one is struck hard in the knee (we hear a crunch of the knee breaking and we see the bloody slash).
► A man with a large ring and a chain around his neck fights with two men: he strikes one man twice killing him and the other man punches the chained man twice, killing him.
► Two men fight: one has a knife, the other kicks the knife out of his hand, they punch and kick each other, and one tries to trip an explosive attached to the other man's ankle, and then they negotiate an alliance. Two men fight briefly, and one holds the other with a chain across his throat, and then lets him go.
► A man squeezes a man's throat until he falls unconscious, and he punches another man who also falls unconscious (or could be dead). A man slaps a woman hard in the face.
► The explosive device attached to the ankle of a man is tripped and he explodes (we see the blast and flames). An explosive device blows up inside a helicopter causing it to crash into a rock wall killing the passengers.
► A man is pushed out of a helicopter after elbowing another man in the face and he lands hard on the ground. Several people in shackles are thrown out of a helicopter into the ocean below (they are each given a key to unlock the chains).
► A prison guard cocks a gun threatening two prisoners. A woman yells at and spits on a man.
► A woman remarks that a man's plan is like "airing a live snuff film." We hear about the crimes that have been committed by 10 people (brutal murders, torture and rape). A man talks about ten people fighting to the death. A man describes an explosive device that is attached to the ankles of 10 people and what will happen if they try to disable it. A man talks about running a drug business, selling hash, and being arrested.
► A man urinates (we see the stream) and a man vomits (we hear gagging).
► A man is described as being racist and a KKK member.

MESSAGE - Justice can sometimes be found under the strangest circumstances. 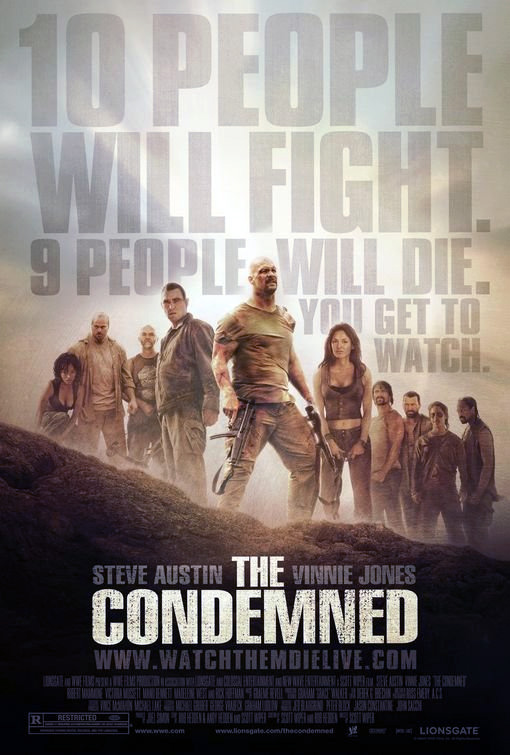