Disney animated film set in the Pacific Northwest before Europeans came to the Americas. An undisciplined young man seeking revenge kills the mother bear he blames for his brother's death. In a supernatural twist, he becomes a bear himself, befriends bears and other forest animals and learns that who's a monster and who isn't is often a matter of perspective. With the voices of Joaquin Phoenix, Rick Moranis, Jeremy Suarez, Dave Thomas and Joan Copeland. Directed by Aaron Blaise & Bob Walker. [1:25]

SEX/NUDITY 1 - Two rams try to get the attention of a female ram by butting heads and calling out to her. A male and female bear flirt and snuggle and another bear says, "get a cave." We see a bare-chested man (he is presumably nude). We see moose buttocks sticking up in the air in a couple of scenes.

VIOLENCE/GORE 3 - A young man throws sticks at a bear, it growls and roars, the young man falls off a ledge, the bear goes after another man, yet another man tries to get the bear's attention, one man falls into a crevice (he catches himself with his spear), and one man breaks away a large piece of the ice ledge he stands on causing the bear and himself to fall a distance into water below (we see the bear come up and get on shore, but the man does not surface). A man chases a bear across rocks, through caverns, up rock walls to a rock ledge, they fight, the bear bites the man's spear and pushes on rocks to shove the man off, but the man lies on the ground holding the spear upward and the bear falls on it when she charges toward him (we hear the bear roar when it hits the spear). We then see the bear lying dead on the ground. A man fights a young bear, they wrestle, they fall off a cliff, the man raises a knife over the bear, and the man holds a spear while the bear charges toward it, but the bear does not reach the spear. A man throws a spear at a young bear, the bear roars and runs, the man follows, the bear walks across a fallen tree trunk, and the man shoves one end of the trunk off and the bear nearly falls into rushing water below. A man jumps across a crevice, he holds onto a tree, but slips and falls into the water below. A bear cub talks about a hunter chasing his mother. A man with a spear lunges at a young bear, and the bear runs and hides in an ice cave. A bear falls from a ledge into water, knocks his head on a rock, floats unconscious and washes up on shore. A young bear and a cub walk along ground that is reddened and hot gas spurts up. Moose run from a man with a spear. We see a burial ceremony. A dead bear is taken into the air by a swirl of light, a man is lifted by an eagle into the air and a small bear is gently returned to the ground. A stampede of caribou goes over three men: one is kicked in the head (he does not seem to be seriously injured). A dog barks at a man and apparently bites his backside (we do not see it although we hear the dog snarl and the man yell). We see cave paintings of men with spears fighting bears. A man tackles a young man, they wrestle on the ground and one, on purpose, drools saliva near the other's face (it appears to be two brothers play fighting). A young bear and a cub argue, and two moose argue. A bear gets caught in a trap, he hangs from his ankle from a tree branch, he swings back and forth trying to free himself and hits his head on the tree, then a rock, and then the tree again; the rope that holds him is untied, he falls to the ground and the tree limb lands on top of him. A bear cub hits a young bear on the head with a stick several times. Two rams butt heads a few times. A woman throws a stone at a young bear's head and pokes him in the nose. A man gives a young man nuggies on the head, a woman raps a young man on the head, and a young bear stuffs a cub into a hollow log. Three men kayak down snow covered slopes, off a ledge, and into rapid flowing water. A flock of seagulls knock a young bear down. A young man rides a mammoth and is knocked off by a large tree limb. A young man is flipped over in his kayak and comes face to face with a killer whale. Brothers tease and make fun of each other in several scenes. A formation resembles a skeleton head. A cub tells a bear to "chew your own foot off," a moose says "something went here" when he smells something on the ground, a cub says "if snow is white, it's alright, yellow or green is just not clean."

MESSAGE - We are brothers and we're all the same regardless of our species. We all must take responsibility for our own actions. 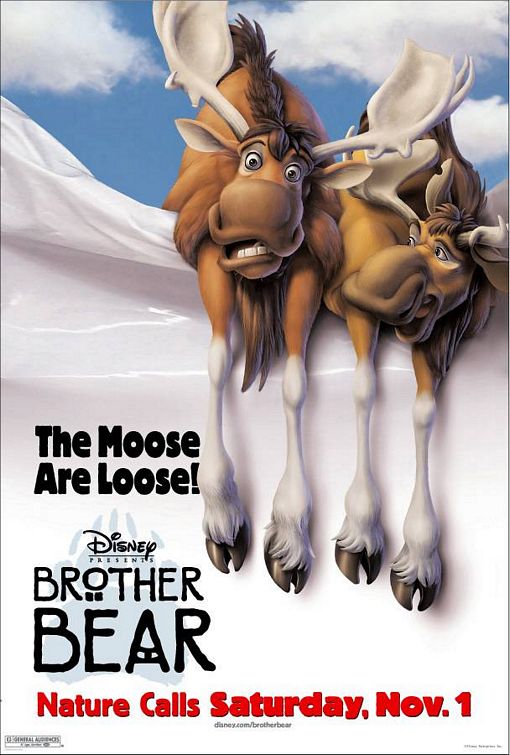