Martin Lawrence stars as a fast-talking 21st century con man who's transported back to the 14th century when he falls into a fake moat at a medieval theme park. Using his street smarts he helps a down-and-out knight and a distressed damsel. Also with Tom Wilkinson, Kevin Conway, Marsha Thomason and Michael Countryman. [1:35]

SEX/NUDITY 4 - A woman comes to a man's room and climbs in bed with him, he rolls over and they kiss (we see his bare back and shoulders and see her drop her blanket but it is a dark scene so nothing else is seen). A woman kisses a man, a man and woman kiss in the street, and a man kisses a woman tenderly. A woman is wrapped in a blanket and lets it fall exposing her bare shoulders (the man she stands in front of reacts to her nudity). A woman climbs out of bed and quickly wraps herself in a blanket. A woman begins untying the front of her dress and a man begins taking off his pants (he thinks she is disrobing for sex, but he's wrong). A woman lies on a table exposing some cleavage and licks her lips seductively. A man makes suggestive advances toward two chambermaids. Women wear dresses which reveal cleavage throughout the movie. A woman massages a man's neck. A man and woman make noises to make it seem like they are having sex. There is some sexual innuendo: a man suggests that a woman "get a bald-headed poolboy," a woman says "despite my many advances…," a man asks a woman "do you own a thong?," a man says "let him lay with any damsel…," a man says "I'll give you women for your bed," and there are discussions of a woman being deflowered and "spoiled," there are crude comments made about French kissing, there are remarks about a man's endowment and a woman's sexual prowess, there are several references to a woman making advances toward a man, and several homosexual references. A man groans and holds his crotch when he gets off a horse. A man wears what looks like boxers and a T-shirt. A man remarks about a horse's endowment.

VIOLENCE/GORE 6 - There is a beheading: A man is marched to the chopping block while the executioner sharpens his blade, the blade is drawn up and comes down hard; we see a glimpse of the head dropping off and a man faints when he picks it up and realizes it's real. There's a scene showing many severed heads on sticks. A man is shot with a flaming arrow and falls off a roof, another man is shot in the back with an arrow and falls off a roof crashing through a canopy, a man is shot in the chest with an arrow and we see some blood on his shirt, a dagger is thrown and hits a man in the chest, a man holds a knife to a woman's throat and then cuts her (we see a bloody line across her neck). A group of people storm a castle, they are surrounded and a fight begins; many people are shot with arrows, stabbed with daggers, punched and kicked. A fight breaks out in a street with lots of punching, kicking, a knee to the groin, and arrows are shot at a man. Two men fight with swords landing several hard blows. A man fights three men by kicking and punching them; another man joins the fight and shoves a man's face (mouth open) into a pile of dung. Two men pull daggers out of loaves of bread and try to stab a man. A man is walked to the chopping block and held with his head in position while he yells and pleads. A man is thrown on the ground and threatened with execution, along with his family. A horse kicks a man in the head, and a horse throws a man, gallops recklessly with a man on his back, drags a man who is holding onto his tail, chases a man, pins him against a wall and sniffs at him. A man rides into a timber and is knocked off his horse. A woman pulls a hot poker out of a fire and holds it near a man's neck; we see leeches on his neck and he yells and pulls them off (with squishy sounds). A scene shows men training for combat using wrestling moves, football maneuvers, punching, kicking, etc. A man is shoved off a roof into some water. There are some wounded and bandaged people after their camp has been destroyed. A man swings from a chandelier rope and lands on a man knocking him to the ground. A man grabs a man, shakes him and yells at him. A man collapses and lands hard on the ground; the man who is with him thinks he's dead and he panics and yells. A man is chased by three lions in an arena. A man is shown with some blood on his forehead, and we see some blood covered swords. A man is nearly run down by men on horseback; he jumps out of the way. A man does the Heimlich maneuver on a man who is choking. A man talks about an execution that was done with a dull blade and "took all day." A man talks about a man having been swallowed by a dragon and that he cut himself free from the inside. Several men are shown chained to the wall of a dungeon and one hangs from the ceiling in a cage. A fire starts on some stands filled with people who panic and run. A man falls into some water while trying to fish out a medallion. A man nearly has a car accident when not paying attention to the road. We see an animal on a skewer being barbecued (it is referred to as road kill). A man wakes up yelling. A man plucks a couple of nasal hairs and winces. A man pulls some gross, sludge-covered stuff out of some water (a baby doll, a rubber chicken). There are discussions about killing a king. There are several verbal threats and people are threatened with swords and daggers. A man goes into a "bathroom" which turns out to be a hole in the ground; there is some matter around the hole and flies buzz about. A man grabs and trears at a cooked bird, and then shoves his hand in a bowl of peas.

LANGUAGE 4 - 9 scatological terms, 17 anatomical terms, 16 mild obscenities, 1 religious exclamation, and several insults. The antiquated term "Moor" is used frequently when referring to an African-American, and it could be construed as a racial slur.

SUBSTANCE USE - A man is drunk and staggering in several scenes; in one scene he passes out.

MESSAGE - Courage isn't the absence of fear, it's fear conquered by the will to go on. 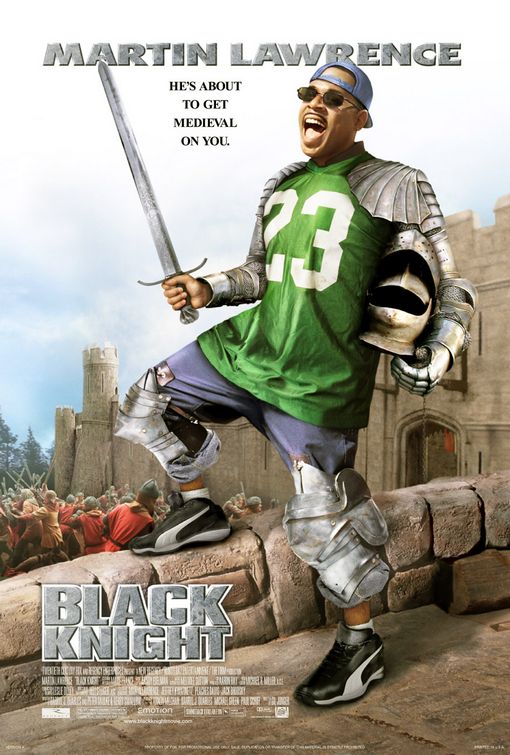