When a space vessel carrying the few remaining humans after Earth was rendered uninhabitable arrives at Terra, they decide to transform its atmosphere and move in. They consider the native inhabitants, the Terrians, who have lived in peace for many generations and have little knowledge of warfare, as expendable (Terrians have large heads and eyes and move as if they are swimming; they do not have feet or legs and look like dolphins). With the voices of Justin Long, Evan Rachel Wood, Brian Cox, James Garner, Chris Evans, Danny Glover, Amanda Peet, David Cross, Dennis Quaid, Luke Wilson, Rosanna Arquette, Ron Perlman and Danny Trejo. Directed by Aristomenis Tsirbas. [1:25]

SEX/NUDITY 1 - A man lies on an exam table and he is nude (we see his bare chest, abdomen and legs. A Terrian's outfit has openings along the side that expose part of her midriff.

VIOLENCE/GORE 4 - Two large armies fight in the skies firing weapons at each other, many vessels are struck and crash, and a large flying creature is struck (we see a bloody wound on its back and it falls from the sky).
► A device is launched and lands on a planet's surface, it sprays a gas and begins to change the chemical makeup of the environment; Terrians begin to gasp and collapse. Two Terrians gasp for air and cannot breathe while being held in a room.
► A Terrian finds other Terrians in what looks like a morgue and some are encased in glass containment vessels and hanging from the ceiling.
► Large, glowing explosives are launched from spaceships and other spaceships are struck: we see explosions and fires and we hear Terrians crying. A gun is fired and causes a current that sucks humans into a tunnel (we see them yelling). A plate glass window breaks and the shards cut several people in a room.
► We see war scenes and hear that three planets fought and their planets were destroyed. A large device is fired upon and explodes and a flying vessel that's approaching also explodes.
► A man is unconscious, begins to cough and we are told that he is suffocating from lack of oxygen. A man collapses and falls from a great distance (he is caught before he hits the ground where there are large spikes pointing toward him). A Terrian is fired at while flying and the ship crashes; the Terrian ejects and hits the ground hard. A man who has just crashed in his ship fires on a Terrian. A young Terrian is chased and fired on by a flying vessel, she flies through a tight passageway and the other vessel is sucked into a wind tunnel (we see the ship in a crumpled heap later and the pilot has bruises on his face). Two young Terrians fly using glider-type vessels through a passageway that has large spikes around its entrance and one is pulled in by what seems like a vacuum; the other struggles to pull her out after throwing a rope down for her.
► A vessel is launched through a chute and is fired upon by other ships. Many vessels are launched from a large flying ship, and they fly through the sky snatching up Terrians in a green glow as they go.
► A man grabs a Terrian and threatens to kill her. A man pins a young Terrian to the floor by the throat and the Terrian gasps. Two Terrians try to dissect a robot.
► Terrians are frightened when a huge unidentified flying vessel in the sky blocks a sun. Two young Terrians fly near a huge flying creature (it looks like a whale) and one of them seems nervous. A robot shines a light beam at a young Terrian and transfers data to her (she is frightened).
► A Terrian and his daughter argue. A man talks about occupying a planet. A man talks about 12 people dying. We hear that Earth "used up its natural resources." A Terrian says of a large, unidentified flying vessel: "It must be a new god."

MESSAGE - Protect your environment. The commitment of genocide should not be an option. 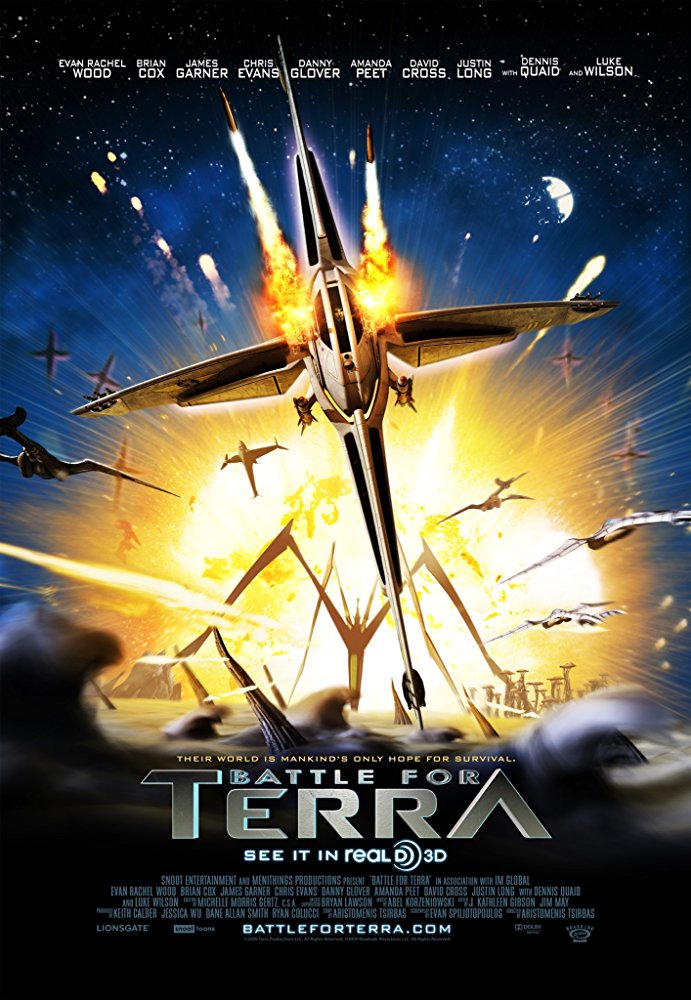