Animated Disney film about an explorer who gets a map to the lost city of Atlantis. Along with a motley submarine crew he sets out to find the mysterious, lost city. With the voices of Michael J. Fox, James Garner, Claudia Christian, Jim Varney and John Mahoney. The introductory scene and a later scene are in "Atlantian" with English subtitles. [1:33]

SEX/NUDITY 2 - We see a sultry woman in a slinky dress exposing cleavage and long legs; the strap of her dress falls off her shoulder. A woman is seen in native Atlantian dress -- which is like a bikini top and a skirt that is slit to the hip. A woman removes her skirt to swim revealing a small bikini-type bottom. A man's robe falls open and he is presumably nude, (judging from another man's reaction) although we don't see anything. There's a comment by one character that he sleeps in the nude. A man and woman hug.

VIOLENCE/GORE 4 - We see the tale of the cataclysm that destroyed Atlantis played out with a scene of flying machines carrying warriors and a huge tidal wave hitting the city (we see a shorter version in another scene). We see people in panic running and screaming. A large snarling creature snaps at some trucks. There is a scene where a small group of people pays their respects to people who were killed. A huge, metal crustacean-like creature with red eyes crashes into a ship and throws people around and they panic. A volcano becomes active; lava flows toward Atlantis, there are explosions and the ground begins to crack up. There's a battle scene with flying machines squealing through the air and lots of gun fire and fire balls. There's a chase scene with pods running frantically away from sea creatures, through narrow channels. Some trucks crossing a bridge blow up causing the bridge to collapse and the remaining trucks to roll off and crash. Flying creatures that look like lightning bugs fly through a camp and when they land they catch fire; the camp is destroyed. A man's arm is cut with a crystal and then the man "freezes" and becomes a crystal fire monster. A man dangles from a cage which is attached to a chain being pulled by a flying machine. Two men fight with punching and kicking, and one swings an ax at the other. A woman fights with some soldiers knocking two down; she pulls a knife on a third but the knife is shot out of her hand. Torpedoes are fired at a sea creature. An explosion causes a huge pillar to fall over, a ship explodes underwater, a balloon explodes mid-air and a bridge explodes, sending splinters through the air. A man throws a woman off a hot air balloon (she manages to catch herself, kicks and punches the man, but she is tossed off again). A man dies from his injuries. A man is seen with a bloody scratch. A woman is threatened with a gun twice, a woman punches a man in the face causing him to fall back onto the ground, and two men are punched by a soldier and fall to the ground. A cage in a balloon, as well as the balloon, fall to the ground and there's an explosion. Some robotic-looking creatures "awaken" with a lot of noise and create a flashing, crackling force field. A story of a leviathan protecting the entrance to Atlantis is recounted. Two women (in separate scenes) are surrounded by a beam of light and carried up into the air: One scene is more detailed with the woman floating into a ball of fire; she begins glowing and her eyes are white. A flying machine ricochets off some rocks and crashes. We see a man doing yoga who is twisted like a pretzel and we hear his bones popping and cracking. A man practices a presentation in front of an audience of skeletons. A man on a ship vomits over the side, and a man called "mole" is very dirty and is surrounded by flies. There's some scatological humor, a whoopee cushion and bean jokes. There is a scene of people eating with bad table manners; lots of slurping and burping. There are some shadowed beings that follow a group of people. A digging machine makes a lot of noise and shoots sparks as it digs. A man jumps on the hood of a car and is thrown off and splashed as the car drives through a puddle.

DISCUSSION TOPICS - Legends, myths and folklore, dying cultures, greed, eccentricity vs. craziness, the death of parents, gods, a father's love for his daughter.

MESSAGE - Our lives are remembered by the gifts we leave to our children. 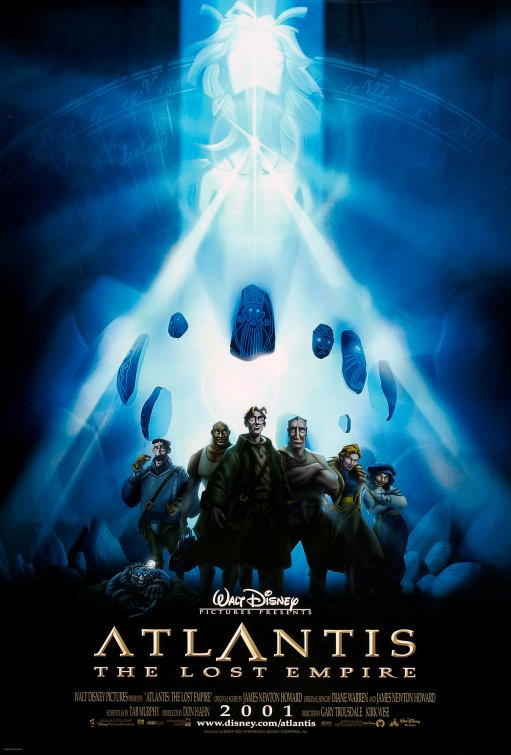