Western about the last days of Jesse James (Brad Pitt). Along with his brother Frank, Jesse is the only other James who's not dead or in prison, and so has to enlist the help of outsiders in order to continue robbing. While he also has to battle all those who are trying to capture him and collect a reward, he doesn't realize that the real danger to his life may lurk closer to him. Also with Casey Affleck, Sam Shepard, Mary-Louise Parker, Jeremy Renner. Directed by Andrew Dominik. [2:40]

SEX/NUDITY 4 - A man finds a woman in an outhouse with her skirt raised above her knees (apparently using the facilities), she blows out a candle and it is implied that they have sex.
► A fully nude, dead man is dumped into a ditch and his bare back, legs and buttocks are visible. A woman dances on stage holding large feathers in front of her (we see her bare shoulders and legs) and people watch from an audience. We see women wearing low-cut dresses sitting on the laps of men in a dance hall. Women wear low-cut dresses that reveal cleavage. A man sits in a bathtub and his bare chest and legs are visible; another man enters the room and looks into the tub while making a remark about the size of his endowment. A man sits in a bathtub, his bare back, shoulders and knees are visible, and another man stands at the doorway and they talk briefly. We see a dead man in a bed (his bare chest is visible).
► A man kisses a woman's hand.
► A man asks another man if it was true that he had sex with a Native American woman (using crude derogatory terms) and asks for details about how it felt and the noises that she made. A man talks about "being with a girl once" and with further information it turns out that she was a prostitute. A woman tells a man that he is pleasant to look at and that he makes her feel warm all over.

VIOLENCE/GORE 7 - A man shoots a man in the head and his head blows apart (blood and matter are visible). A man is shot through the back (we se a large bloody hole open in his chest and we see the shocked look on his face as he topples over).
► Two men shoot back and forth at each other: one man is struck in the leg (we see blood spurt), the other in the arm, and then one is shot in the back while a third man jumps out a window and crashes onto the ground hurting his leg; one of the two men left inside is shot in the head (blood pools on the floor).
► A man grabs a young teen, punches him, throws him on the ground, continues to punch him in the head and face while holding his hand over his mouth, pulls on his ear while threatening to tear it off, and slams his head on the ground repeatedly (he eventually stops beating him and the boy runs away).
► Two men point guns at a man standing on a chair, one fires and strikes the man in the head, the man is flung into a picture on the wall breaking the glass, blood spurts and sprays on the wall and the man falls to the floor dead; the man's young son looks on while his wife cries and screams and she has blood on her hands and face from touching him. A man shoots himself in the chest (we hear the shot and the man slumps over with a large blood spot on his chest).
► Men with guns threaten two men: one man is struck hard on the head with a gun and he falls to the floor unconscious with blood pooling under him, and a gunman holds a gun to his head preparing to fire but is stopped by another man.
► A man is held with a knife to his throat and he squirms and moans. A man holds a gun to another man's face and threatens him, but then pulls the gun away.
► A train is stopped by several men wearing sacks over their heads, we hear gunfire, men with guns board the train, a gunman shoots in the air while walking through the crowded cars, two passengers are struck hard on the head with the butt of a gun and blood is shown on one.
► A man picks up two snakes, they wriggle and twist themselves around his arm, he presses their heads against a table and cuts them off with a knife (blood spurts, we hear a squish and the bodies continue to twist and move).
► A man jumps off a stage and into an audience, grabbing a man and punching him repeatedly; he also swings at others who try to stop him and we see him later with blood on his face.
► A dead man is strapped to a table and photographed with many people gathered around. A dead man lying on large chunks of ice is photographed and we hear that people were bidding for the remains. A dead man is dumped into a ditch and covered with snow. We see a dead animal hanging by a rope around its neck outside a man's residence.
► Two men re-enact a shooting several times on a stage. A man is grabbed by police and forced to the floor.
► A man points a shotgun at a man who turns toward him, we hear no shot and the scene ends but it is implied that the man is shot. A drunken man shoots at the floor of a saloon, swipes a man's drink off a table, falls to the floor and then stumbles out of the saloon.
► A man hears a noise in his house, he investigates while carrying a gun, he finds another man seated at a table waiting for him, they talk briefly and we then see them riding away on horses. A man cocks his handgun when he hears someone creeping up behind him.
► A voice-over describes the injuries that a man has sustained in his life: he lost the first joint on one finger (we see his hand with the missing part) and that he has bullet wounds that have not fully healed in his chest and leg (we do not see them).
► A man says another man shot at him for "tampering with his daddy's wife." A man asks another man if he ever contemplated suicide. A man is accused of slitting a man's throat for money. A man talks about a man cutting his heart out. A man says, "he'll cut your throat" about another man. A man talks about how he threatened a bank cashier during a robbery. We hear that several men are in jail or dead. A man talks about a woman who could suck a noodle up her nose.
► A man stands on a frozen lake and shoots at the ice (it does not break and we see a fish swimming beneath it).
► A man gags and spits. A man spits and we see goo. Men spit in a few scenes and one time a man accidentally spits on another man's shoe. A man coughs violently and appears to be ill. A man kills a fly and we see blood on his fingers.

MESSAGE - Heroism is in the eye of the beholder. 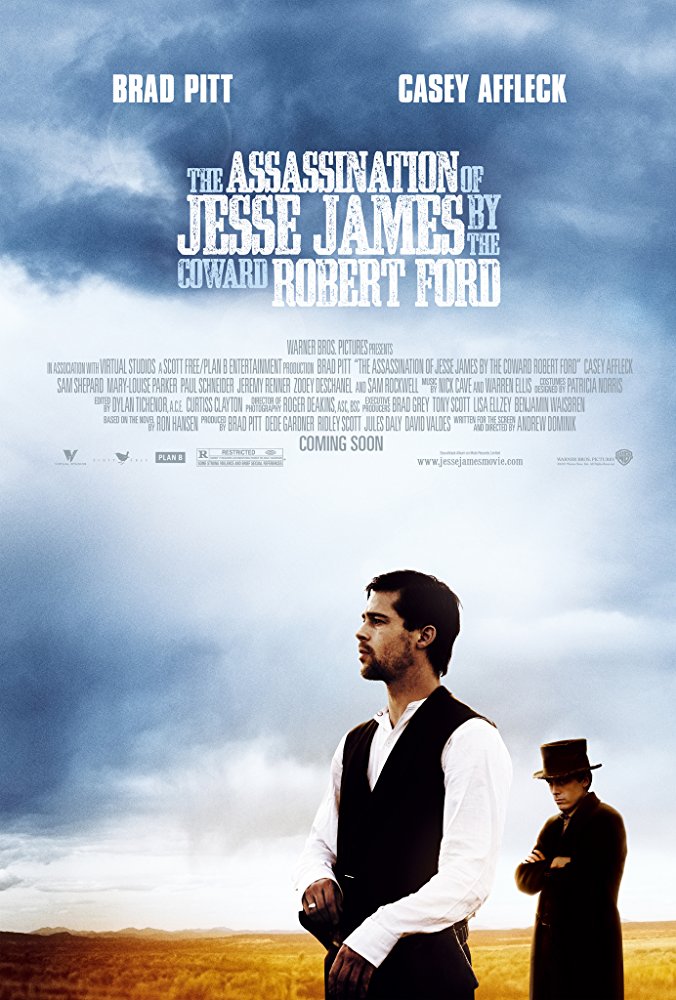