On Christmas Eve, Santa (voiced by Jim Broadbent) delivers presents to all the children of the world, while his son Arthur (James McAvoy) works at the North Pole Post Office answering letters from the kids. When Santa, his older son (Hugh Laurie) and Grandsanta (Bill Nighy) fight over the role of Santa Claus, and an elf finds an undelivered present in the workshop, it's up to Arthur to find a way to deliver the present on time. Also with the voices of Ramona Marquez, Imelda Staunton, Ashley Jensen, Will Sasso, Laura Linney, Ian McKee, Joan Cusak, Robbie Coltrane and Michael Palin. Directed by Sarah Smith. [1:37]

SEX/NUDITY 1 - Two elves kiss while in the stance of a famous photo of a nurse and sailor at the end of WWII. Santa and Mrs. Claus sit in bed, under covers, while wearing pajamas.
► A man says that in France, elephants breed on the trains.

VIOLENCE/GORE 3 - A fighter plane chases a sleigh and bombs it with 2 missiles, and the sleigh explodes in flames and disintegrates, but no one is injured (the two passengers bailed out and landed safely in a full dumpster).
► A sleigh is flown through the air wrecking Christmas displays around the world, all of its reindeer are knocked out of their harnesses, a farmer shoots at the two men driving the sleigh, he misses, and reports "aliens" to the news media; world governments put out an alarm that extraterrestrials are attacking major cities with bombs made of chocolate.
► A circle of lions surrounds two men, one man sings "Silent Night" and the lions sleep; when the lions are awakened they chase the men to a sleigh and continue to chase until magic dust makes them and other animals float away.
► Two men fight and the wife of one man shouts at them to stop. Four men argue over who should have the most authority and about mandatory retirement.
► At a toy factory, a door is left open and we see an elf lying in the sleigh warehouse bay, unconscious, as a polar bear bends over and looks into his face.
► We hear that an elderly man threatens elves frequently and that he threatened once to feed the elves to polar bears. A man tells his grandson that the way to become Santa is to "knock off" (kill) Santa and everybody stares for a minute. When a man and his grandson float into the sky we hear that floating can cause beheading and the grandson shivers and complains about a phobia and allergy to beheading. A man tells an elf that what they need to do is knock a boy out with a large stick. An elderly man says, "In 1923, I had a heart attack at the reins and kept on going" and "I flew through the Cuban Missile Crisis in 1963 and almost started World War III!" In the middle of a desert, an elderly man and his pet reindeer lie in the sand and as his grandson walks away the man calls out, "Don't leave an old man and a reindeer alone at Christmas!" Two men disguise their sleigh as a UFO with an alien's face on the bottom and this causes TV news reports of "alien trouble."
► Three times, hundreds of elves in a command center panic and shout when they think a present has been misdelivered; during the last time, an elf pushes a panic button that starts a self-destruct "Meltdown of the North Pole" (we see an ice statue melt and posters of media announcements about Evil Aliens).
► Thousands of Christmas Elves and Santa's helpers dress in battle fatigues and deliver presents in a military operations manner. 21st Century Santa and elves use military style uniforms and zip lines to enter houses and leave presents; elves carry what appear to be combat batons. A man and his grandson steal a rowboat and try to row 3,000 miles.
► We see a child's drawing of Santa Claus in flames with a note that a young friend does not believe in Santa (flames are burning up a myth).
► A man slips, slides and falls on ice several times, falls out of a tree, slips on a ladder, nearly slips under the treads of a small tank and knocks people down (no one is harmed). In a command center, a man steps on keyboards, accidentally elbows elves in the eye, knocks off someone's glasses and spills hot cocoa into a keyboard. An elf slides into and leaves a home through a bathroom window and falls in the toilet twice. Santa comes into a house and falls face-first into a toilet. An elf hops around with a mousetrap on his foot. A Chihuahua bites the ankle of a man twice and later bites another man's ankle (no blood is evident).
► A dead mouse falls out of a bugle onto the floor and elves screech, "Ewwww!" An elderly man drives a full garbage can on an icy road like a sled with an old reindeer pulling it; the man mistakes a garbage bag for a toy bag and empties garbage under the Christmas tree inside a house, and picks up a rotten brown apple core and calls it a bonbon. An old man has a set of false teeth that slip out with slobber several times; once they fall into the mouth of a reindeer and once into a bowl of cranberry sauce at a dinner. False teeth are attached to the end of a reaching-pole the elves use for gift handling. An elderly man uses a broken-off antler from his old pet reindeer as a cane.

SUBSTANCE USE - A man sits beside a cart of ornate liquor flasks and mentions his past escapades when a drunken elf fell out of a sleigh and disappeared, a man says that a dab of whiskey on the lips makes kids fall asleep and remember nothing, an elf holds an unopened champagne bottle, and we see a few glasses of what could be wine at a meal (no one drinks).

MESSAGE - It doesn't matter who plays Santa as long as no one is forgotten at Christmas. 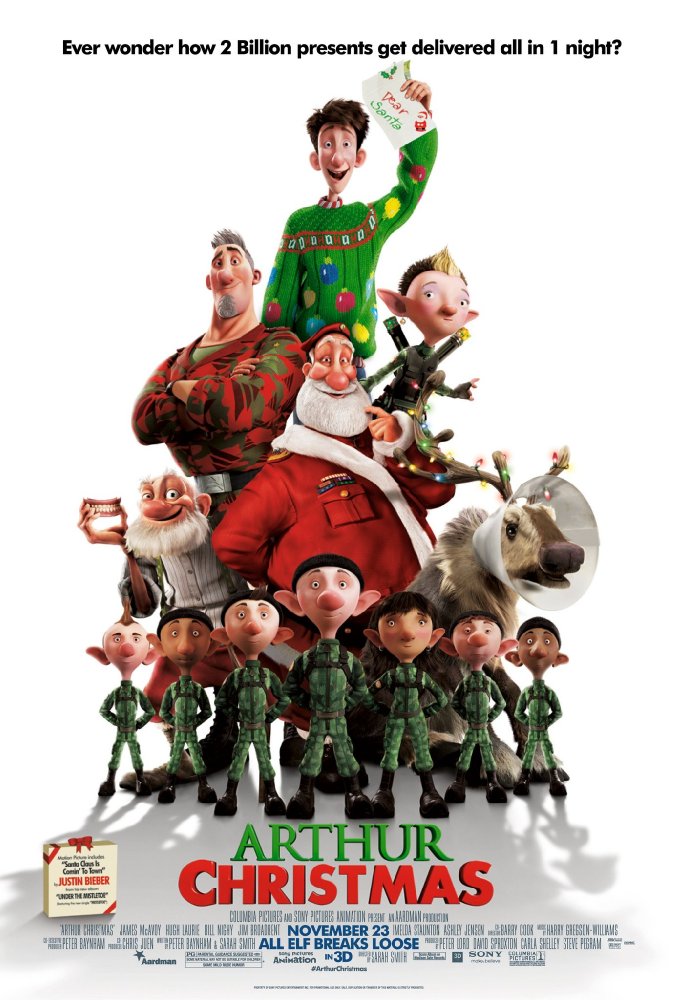